Severe restrictions on the movements of people and goods imposed in recent weeks are having widespread negative effects on the seed industry in the Asia-Pacific region with international seed trade particularly affected, a survey of seed companies finds.

The seed trade is highly international with large volumes of seed shipped across borders to meet farmers’ demand across the Asia and Pacific region. In 2018, more than US$4.1 billion worth of sowing seed was traded in the region, constituting about 14% of the global seed trade. This trade is essential for the region’s food and nutrition security and economic prosperity. Yet shipments are affected by lockdowns imposed by governments across the region to stem the Covid-19 pandemic. Although many governments have since recognized seeds and other agricultural inputs as “essential items” – effectively exempting them from lockdown restrictions – seed companies have been reporting a number of supply-chain challenges.

To better understand these challenges, APSA’s Special Interest Group for Vegetables and Ornamentals joined with the World Vegetable Center (WorldVeg) to conduct a survey among seed companies operating in the Asia-Pacific region. The online survey sent to seed company managers recorded their opinions on how the crisis has affected their business and identified emerging bottlenecks in the seed supply chain. Sixty-eight managers responded to the survey representing at least 48 seed companies*. (See below for sample details and a link to download the data.) 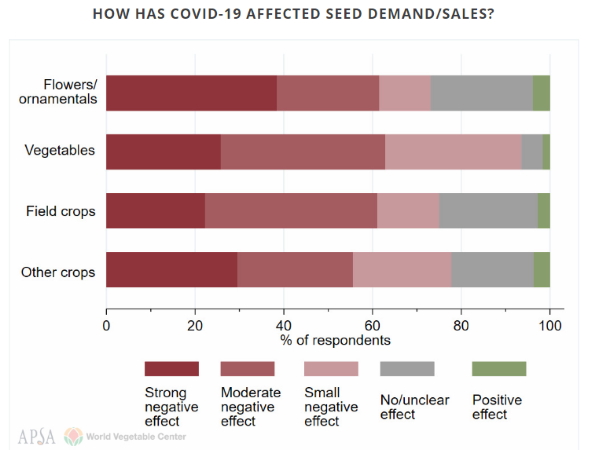 The second graph shows that nearly all aspects of the seed business are negatively affected with more than 85% of respondents reporting negative effects on international and domestic seed shipments, difficulties in getting inputs, and difficulties getting labor for seed production and processing. Reduced access to finance was also reported by 64% of the respondents. Yet, international seed shipments clearly appear as the most severely affected aspect of the seed industry with 52% of the respondents reporting a strong negative effect. 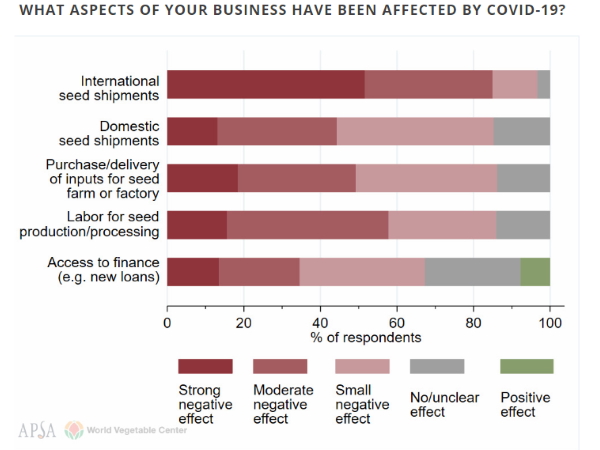 Strong effects on the international seed trade
Zooming in on the aspect of international trade, the third graph identifies bottlenecks that have occurred in international seed shipments. We looked at aspects related to the volume of export orders, finding freight, clearing customs, obtaining export and import permits and distributing seeds in destination countries. Respondents were asked to determine whether a certain aspect “has become a problem”, “is likely to become a problem” (should the situation continue), or “is not a problem”.

The graph shows that a wide range of problems have already occurred in many aspects of the seed trade with key bottlenecks including difficulties finding freight solutions (reported by 54% of respondents), reductions in new export orders (42% of respondents), and difficulties distributing seed in the destination countries (42%). Many respondents also reported problems getting export and import permits, phytosanitary certificates, and customs clearance. Furthermore, the findings show that many companies not yet affected expect that these issues will become a problem as the crisis continues. 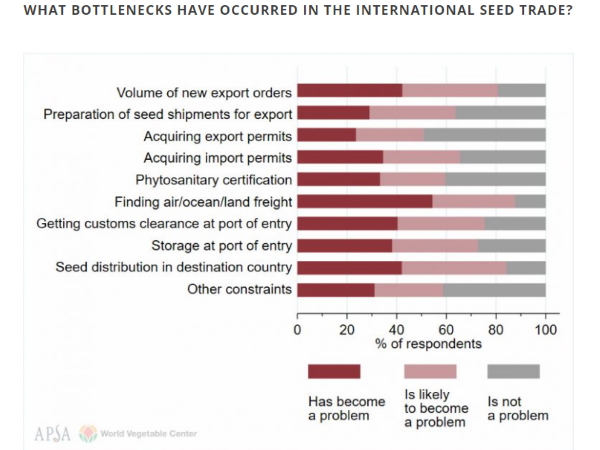 This is a concerning trend considering that most countries in the region are highly dependent on seed imports for some of their cultivated crops to ensure their food and nutrition security. The largest seed importers in the region are China, Malaysia, Pakistan, Australia, Japan and South Korea. Only Thailand, India, Israel, New Zealand and Indonesia had net surplus in their seed trade in 2018 according to international trade data analyzed by APSA (see report on page 8-9 of Asian Seed Magazine here)

A key problem underlying some of these bottlenecks is the reduced capacity of and delays in courier services. A respondent from Australia mentioned “delayed access to phytosanitary certificates and original documents for customs clearance in countries of destination”. Seed companies depend on courier services to get phytosanitary certificates to the destination country ahead of the seed shipment, but they are unable to do this at the moment. Unreliable courier services were also mentioned as a constraint to small seed shipments by companies in India whereas the movement of bulk seed shipments domestically was reportedly less problematic. Similarly, the Japan Seed Trade Association (JASTA) reported that problems with flights and domestic transportation have adversely affected “parental seed shipping”. The association underlined some setbacks with seed production and overseas sales, pointing to delays linked to the issuance of vital documents, route changes and even the suspension of field operations in some cases. JASTA said that some companies have even reported returned shipments and expedited shipping fees that were double usual fees.

Similar challenges were experienced across China’s seed industry as early as February, with local lockdown measures having negative effects on the domestic seed sector, including labor shortages, setbacks in distribution and retail, and increased expense for transport and logistics, as confirmed by a statement issued by the China Seed Association in March. Though this had initially fueled concerns for delays in spring planting — which typically proceeds the Lunar New Year period — CSA credited “swift and stringent government measures” and strong cross-sector cooperation and communications as key to ensuring the supply of seeds and inputs to farmers in time for spring planting, which has reportedly commenced on schedule.

Coping strategies
To further identify and understand effective coping strategies, our survey asked respondents to share measures and solutions their companies have implemented.

Many companies reported that they implemented ‘social distancing’ recommendations by allowing some of their staff to work from home, while still maintaining vital field and onsite operations through staggered staff shifts.

Respondents also emphasized the importance of continuous monitoring of the market situation and maintaining communications with customers. In addition to seeking new routes for seed shipments, some respondents recommended making advance bookings for space on vessels or flights and to negotiate transportation costs, which were reported on the rise.

Another key point emphasized was the need to seek support from concerned government agencies regarding rules and procedures for so-called “green lanes”, which have been implemented in a number of countries to expedite the movement of food, seeds and other vital agricultural inputs.

Another recurring recommendation shared is for companies to increase their use of digital platforms to facilitate the sales of seeds  and related products online, while also devising promotions and incentives to stimulate sales.

Looking ahead
As the effects of Covid-19, associated lockdowns and economic downturn are still playing out, it is too early to draw concrete conclusions from this survey. Yet, a reduction in seed demand and international seed shipments will have consequences for the region’s food and nutrition security and the income of smallholder farmers. Governments can try to ease bottlenecks in the seed supply chain by exempting seed production, distribution and trade from lockdown restrictions and ensuring timely processing of import/export permits and phytosanitary certificates. It is important that bottlenecks are addressed before the upcoming seed production season and that the local situation is monitored closely.

Aside from the immediate effects on international seed movements, companies are also reporting or anticipating challenges related to seed production, operations, and research and development. On the latter, some seed company staff experienced difficulties in local travel to inspect field trials. Moreover, commercial trials and new product launches may be adversely affected if customers are unable to visit field demonstrations, which could have long-term consequences on the seed industry.

While there seems to be a common sentiment that many challenges can be mitigated and there is much optimism for the situation to improve in the medium- and long-term, extensive delays and increased expenses could prove detrimental for some companies and some countries should lockdown restrictions persist in the upcoming seed production season.

About the survey sample
Responses were collected over a week-long period, from 8-14 April, with a total of 68 respondents completing the survey. Respondents represented companies based in or operating in more than a dozen countries or territories, including China, India, Japan, Bangladesh, South Korea, Thailand, Pakistan, Australia, New Zealand, Turkey, Vietnam, the Philippines, Indonesia, Afghanistan, Chinese Taipei (Taiwan) and Hong Kong. Of the respondents, China (26.5%), India (20.6%) and Japan (11.8%) had the highest representation. The 68 respondents are likely to represent 68 companies; however, 20 of the responses were anonymous and it could be that some came from the same companies. In addition to sending the survey to seed companies, APSA also reached out to National Seed Associations (NSAs), and received detailed responses from JASTA, CSA and the Federation of Seed Industry of India. Full survey results and summarized responses, including country-specific comments and recommendations can be downloaded here.