Tasmania is home to one of horticulture's hidden gems: hydroponic grown wasabi

It is one of Australia’s little-known secrets, but Tasmania is home to one of the world's rarest horticulturally-grown condiments - wasabi.

TasFoods Limited produces the Japanese-based crop, which is grown at Shima Wasabi in the north-west of the state. Managing Director and CEO Jane Bennett says it is one of the scarcest plants of its kind in the world, and consumers often mistake 'wasabi-flavoured' paste for the real thing. Quite often horse-radish is used to create the substituted flavour.

"We are an industry sector that suffers from imitation, and a lack of understanding of what the real product is," she said. "It's a brassica that originates in mountain streams in Japan and has been used for many centuries. When you take the stem of the wasabi plant and grate/pulverise it into a paste, it causes an enzymatic reaction and that creates a heat output. Wasabi is also full of antimicrobials. Traditionally, the Japanese have partnered this with raw fish. It was less about the flavour impact than ensuring people didn't get sick from eating raw fish." 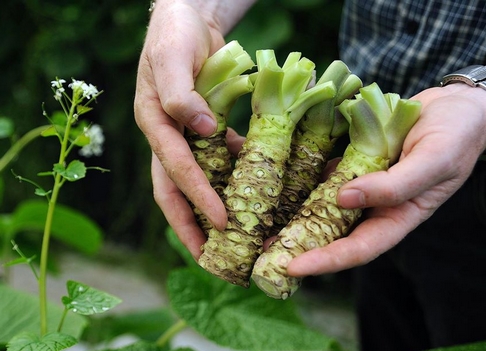 Hydroponic growing
Ms Bennett admits that as a crop it is difficult to grow, and is suited to the cool locations, where even in the summer, temperatures rarely get above 26 degrees Celsius. Founded by Stephen Welsh, Shima Wasabi utilises a unique hydroponic growing system that enables a controlled growing environment.

"Wasabi tends to wilt really badly at any temperatures above that," Ms Bennett said. "It has about an 18-month growth period to get to a harvestable material. But most of the plant is edible; we sell flowers, leaves and the storks to restaurants as part of the different components that they use, along with the stem."

The history of growing wasabi in Tasmania date back to the 1980s, when the Tasmanian government was looking for potential markets in Japan, and products that their consumers would be familiar with - that were suitable for growing in the Australian isle state. Various research had to be carried out to discover the ideal growing conditions.

TasFoods has the objective to take Tasmanian-based products and acquiring business that suits the growing attributes of the state, and turning them into premium products that are sold to markets across Australia, and internationally.

"In its traditional form, it requires a knowledgeable market for selling it," Ms Bennett said. "We get a couple of weeks of shelf-life after it is harvested, but for fresh wasabi stems, it is about the market having an understanding of how to use it - that is the most challenging part. In Asia, that is less of an issue because it is a product they have traditionally used. There is not a lot of wasabi exported out of Japan, as they use most of what they grow domestically. China has also become a big market for producing wasabi, but it is about being a trusted source, and that's where our opportunity to export lies for us."

Most of the focus has so far been on the Australian market, and while fresh wasabi goes to the market, Ms Bennett says TasFoods processes the leftovers; freeze-drying it and turning it into a powder.

"That's an industrial product that we use ourselves in dairy products," she said. "So, it goes into cheese, or we have a powder that people can rehydrate and create their own paste, as an alternative to the fresh. We historically sold directly to restaurants, but as the overnight delivery services become less reliable, it has become a challenging path to market. So, we have started working with distribution partners to deliver the product safely to the restaurants through their provider networks."

TasFoods has other brands in the chicken meat and dairy sectors.