Greenhouse vegetable cultivation is gradually feeling the impact of the coronavirus too. Until last week, it seems that tomato growers were still reasonably safe. However, the hoarding effect that resulted in higher prices is now over.

The market will come under pressure in the next few weeks, and not only in tomatoes. This is partly due to an annual phenomenon. The coronavirus outbreak is, however, undoubtedly throwing an extra spanner in the works. That is according to Arie Middelburg of GreenMatch in the Netherlands. He is discussing the current tomato-specific market situation.

Morocco quickly fell away
Prices have held up in the last while. A glance at the European tomato dashboard shows this. It was updated on 20 March. These prices are, at least, on par with the five-year average. It seems that trading is still going well, even in Italy and Spain. These two major tomato producing countries are in lockdown.

It seems only Morocco is suffering. This is based on the figures that follow below. Markets all over Europe are, however, in danger of being thrown into turmoil now. Prices are also being put under pressure. "Morocco fell away far faster than usual regarding production. Partly due to that, prices temporarily shot up. But that is over now," says Arie.

Slower effect on the tomato market
That the coronavirus is affecting the tomato market, is not unexpected. "With tomatoes, it just seems to be taking longer. The retail-focused programs took a bit more of a toll on tomatoes. Production is, however, now increasing considerably. That is normal for this time of year. Market pressure is, therefore, on the rise."

The retail sector first focuses on the usual programs, says Arie. "They buy-in where needed. That certainly happened last week. A lot of people were panic-buying then." This caused prices to climb, which is not (yet) reflected in the European figures below. Arie is not surprised by this.

"There is, however, no limit to how much retailers could buy.  You see that they are still sitting with stock. There is, therefore, less demand. The hospitality sector and day traders are also needed. There is now hardly any of this. As a result, I expect prices to drop. I have said this before. There is no other way in this market situation."

Fall has begun
In some cases, the coronavirus effects were visible last week already. These are besides the hoarding. "For example, last week, I heard about logistics problems. This was from people in Spain, where it caused delivery delays. There are staffing problems in the distribution centers and only one driver per truck. That is, of course, causing delays," continues Arie. That is no longer the case, assures Arie. "It is also not acceptable. We are talking about food. Borders must, therefore, remain open."

Arie admits he is 'not completely at ease' with what the next weeks might bring. "We started off with relatively high prices. The decline seems to have begun now. Prices are now roughly at the 2019 level. And that was a great year. But I am concerned that prices will fall even more. That will be due to this coronavirus and the rising production." 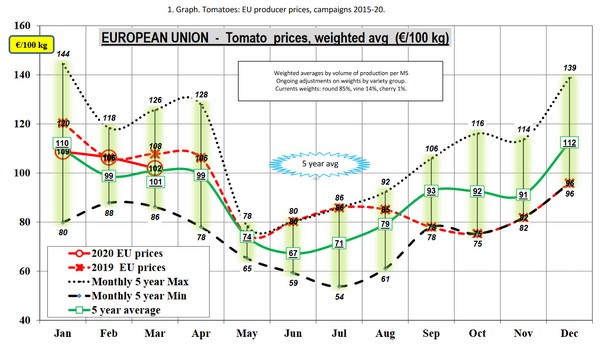 Let's take a look at the European tomato dashboard. It was updated on 20 March. It shows that the average tomato price in Europe lies at €102/100kg. This is just €1 above the five-year average. It is €6 under the average price in 2019. That is an average picture in a segment with numerous different tomato varieties. Many variables influence it, but it does indicate a few things.

Lockdown not yet translating into severe price fluctuations
Tomato prices in Italy and Spain - both these countries are in lockdown - are not much different from the general European picture. Italy has now been in lockdown for more than two weeks. This country is noting an average price of €1.42/kg in March. That is a little lower than last year's €1.48. But it is still higher more than that five-year average of € 1.09.

Is the corona crisis not having any effect at all on Italy's price lines? Not really - in February, the average price for a kg of tomatoes was still €1.38. That means the price has even increased a little, by €0.04.

The same is true for Spain, where the picture looks similar. So far, for 2020, the average tomato price in that country has been so-to-say stable. In January as well as February, it was €0.77.  In March, it has been €0.76. That means prices are still €0.01 higher than the five-year average. They are €0.05 under the 2019 average. That is, however, far from shocking.

The Netherlands: Drop in price for TOVs, in particular
The country that shows the most fluctuation in price on the dashboard is the Netherlands. This country is not in complete lockdown. There are, however, strict regulations in place. These should not apply to cultivation. Since it concerns food production, it is considered essential. In January, a kg of tomatoes was selling for €1.40, and for € 1.28 in February. Then came March with a price of €0.98. That is €0,11 under the five-year average. It is also €0.04 less than in 2019 when prices were not particularly high either.

This drop in prices is mainly in the tomato on the vine segment. There, prices in the Netherlands dropped by 25% in one month. From week 8 to 11 alone by €0.21. All countries have reported losses here. These vary from 25% in the Netherlands to 'only' two percent in Italy, and everything in between. On average, the European figure shows an eight percent decline in TOV prices.

The fall of cherry tomato prices reported by Spain is even more severe. These decreased by 33% between February and March. From week 8 to 11 alone by €0,19. Overall, in Europe, these tomatoes' prices declined by 13%.

Plus for Belgian round tomatoes
Not only price reductions were noted. In the round tomato segment, prices in Belgium rose by €0.24. This was in the time between weeks 8 and 11. This increase was also the case in Spain (+€0.12) and Italy (+€0.07). Those countries reported an increase of a few euro cents. When it comes to percentages, prices in Belgium rose by 18% from February to March. During the same time, prices in Italy went up three percent and in Spain, by one percent.

Moroccan imports in early free fall
From February to March, were fewer than half the number of tomatoes were imported from this North African country. This concerns imports from the European Union and the United Kingdom. That is never the case at this time of year. There were 67,459 tons of tomatoes in February. In March, 28,578 tons remain. This free fall usually only starts in March. It is then normally more gradual too. 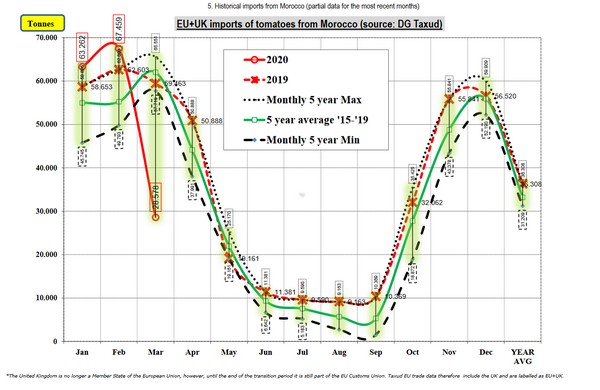