"The transition that horticulture has seen is truly impressive" 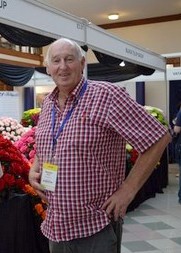 Last year, we started our series 'Andere Tuinbouwtijden' featuring industry veterans. Many a seasoned worker reminisced on times long gone, and most are still very active, even after their retirement. Marten Barel is one of them, and after reading all his colleagues' stories, he knew he has even older stories. "I'm simply even older than them. I've seen Henk Vrijland carpenting window frames in the shed at my father's brother's greenhouse."

At HortiContact, Marten sat down in a quiet corner and told the story below.

Raspberry jam
Marten was born in 1934 in Ginneken, which is the 'strawberry area' of the Netherlands, as the son of a grower. "My father cultivated all sorts of things, but strawberries and raspberries were the main crops. Crop protection hardly existed, and what little there was, was very expensive."

As soon as the harvest was in, Hero came along, a jam producer with their own factory. They picked up Marten's father's raspberries. "Because of the cobblestone street, that wasn't without a fair amount of shaking. Because of all the shaking the worms came up, and were skimmed off of the raspberries. After I saw that as a kid, I didn't eat raspberry jam for years", laughs Marten upon thinking back. 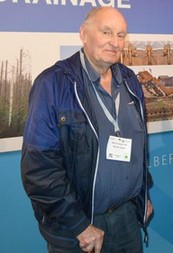 Carpenting window frames
It's a small detail in a long life story, but later on it becomes clear that it has been of great value in Marten's career. In his teenage years, Marten's father was bought out, and with that Marten's plan to take over his father's company - he 'had to become a grower' - failed. "I started working at the company of my father's brother. He had a company in 's-Gravenzande, where they used to cultivate flowers."

We're now at the end of the 1940s, early 1950s. Marten went to horticultural middle school, back then the only one in the Netherlands. When he wasn't at school, he helped at his uncle's company. "Harvesting lettuce, for instance. To make some money, too."

At that time, Marten saw Henk Vrijland, who would later become a greenhouse builder, carpenting window frames in the shed. "Frames for loose single windows for the greenhouse roof. That became outdated quickly."

Early version of ‘turnkey’ greenhouse building
That same Henk later on became known for Voskamp & Vrijland, the greenhouse building company that we've seen in many a story about the horticultural past (of the Westland). "Henk was the builder, Voskamp was the administrator", tells Marten. "And Boers got in there to make concrete greenhouse foundations, while De Bruin installed Bruna boilers, and Cor Brinkman who came by on his bike to install rain pipes."

All things considered, Voskamp & Vrijland did 'turnkey', Marten looks back. "Together with Brinkman and Van der Hoeven, they laid the foundation for the huge development that horticulture has seen since then. By the way, they were all special guys, especially for me, coming from the province of North Brabant, because there was (and still is) a cultural difference." 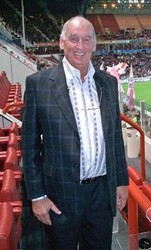 Electronical timing for ice skating
In winter, the growers didn't have much to do. So there was a lot of ice skating in those years, and Marten participated as well. "In 1956 I skated the Elfstedentocht, more without than with gloves, despite temperature being below zero. I found those little cords that held the gloves during skating so annoying, that I thought I could do without them. That wasn't the best idea, but I did succeed in my mission: completing the tour."

Photo right: Marten in 2016. "Next to work, golfing is my hobby, but unfortunately I don't have the time for it."

Marten kept ice skating, he even developed the electronical timing that nowadays ensures an accurate time, on television as well. "I did that together with a friend who worked in the laboratory at Philips."

He also participated in international ice skating tournaments and even in 'Ter land ter zee en in de lucht', a famous Dutch TV show in which contestants did all kinds of crazy stunts to reach the bell as fast as possible.

Instructor
But, we're getting off track. Also in the 1950s, Marten took his first steps in the field he's still in today, soil decontamination. "I started with Geert Persoon. He had a decontamination company. I learned everything from him, and couldn't have wished for a better instructor."

After tagging along for a few years Marten got - "yes, getting, really, for free" - the Limburg/Eastern Brabant sales region from Geert. "That was a nice gesture. We continued to work together, for instance helping each other out when it was really busy in Geert's Westland or my Brabant or Limburg."

Abrupt ban
Up until 1982, most of the soil was decontaminated with methyl bromide. "That was very common back then." The electronical timing is important here, too. "The dosing of methyl bromide had to be done very carefully, just like the timing. The container with the methyl bromide was attached to a computer, and it was important that the dose was not too low. That often went wrong."

In 1982, the Netherlands was the first country to ban the use of methyl bromide. "Out of the blue actually, very abrupt. It was decided between Christmas and New Year's Eve, I was in Norway for the ice skating when my wife called me. It was very abrupt and demanded an alteration of the way we used to decontaminate the soil." 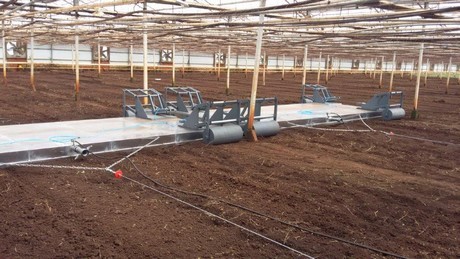 Steaming growing medium
A first alternative was the steaming of the growing medium, i.e. steaming rockwool. "Back then, a grower would go one year with rockwool, and then throw it out. By steaming rockwool, it could last up to three years. A fun fact is that the crops would even grow better on rockwool that was a year old, because often some nutrients would stay in the substrate, from which the plant profited."

In those years, after the ban in 1982, Marten steamed 3 hectares of rockwool substrate per day. "That was very fast, and especially between November and February, I'd be steaming 6 days a week, 24 hours a day, so to say. The pallets of substrate got into the steaming cell, in which I got everything disease free with 180 degree Celsius steam. I had a patent on that system, and later on I sold quite a few of those installations."

Sucking
In the meantime, the developments in rockwool substrate didn't stand still. The substrate got lighter, which meant that steaming wasn't possible anymore. "The substrate was made so light, that it collapsed after steaming, interrupting the whole water management."

Time for a new innovation. Caused by German commotion, where they discovered that too much bromine was in the lettuce, Marten 'thought to be smart'. "I started trying to suck methyl bromide out of the ground via drainage. At first, things only got worse", Marten laughs, thinking back of that first try. 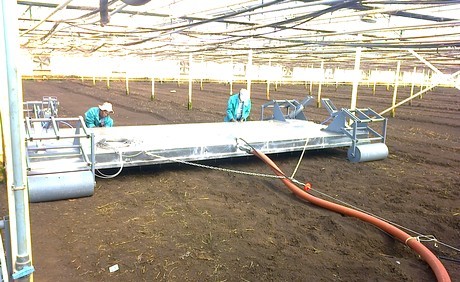 System goes international
But Marten did not give up. "I discovered that there were quite heavy soil currents, and the idea came up to suck steam into the ground. That way, we could suddenly steam up to 60 centimeters deep, with the same energy use as steaming 30 centimeters with tarpaulins. Moreover, that last way did not even kill all soil diseases.

The Dutch government saw that too, and set up a grant. "In chrysanthemums, for instance, in a short while ninety percent of all growers used our system. Later on that system, with patent, was bought by colleagues. The system is internationally still often installed," says Marten proudly.

‘What does it cost?’
Marten never actually quit, although his son Cas is now also involved in the company. "I still work and still install installations, just last year in Ethiopia for Florensis."

A list of all continents and countries where Marten installed systems is what follows in his story. "Asia, with the Philippines and Japan, Australia, Africa with Kenya, Uganda and South Africa, the United States, and soon will be shipped to Ecuador. Actually it's just the Netherlands where there's not many installations, because here people first ask what it costs, and not how it works, in my experience." 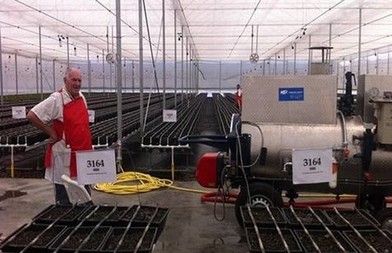 Developing countries
That Marten saw so many countries, was also because he helped developing countries - "my area was Africa and Middle and South America" - with phasing out methyl bromide. "I did that ten years when the United Nations asked me to, after the Montreal protocol."

Later on a role as technical advisor for the UN followed, in a committee that made decisions about product allowance. "A rather important function, in which there was quite some discussion among each other, especially about US applications, where the UN regulations weren't always perfectly followed."

Plant sauna
Clearly, Marten did not sit still in his life, and he still doesn't. This spring, in collaboration with several other international parties, a new system will enter the market. A plant sauna that is going to ensure that strawberry and if possible also other plants can be treated in an environmentally safe way before transplanting. "With steam again, of course", smiles Marten. "It helps with for example spider mites, fusarium and multiple fungi."

Made his contribution
Marten is proud, and rightly so. At HortiContact, he thoroughly enjoys seeing the people he knows and telling about his latest innovation. "Innovating is done based on experience. I still just really like it. Where the men from the Westland helped the horticultural development in the Netherlands and around the world, I like to think I made my contribution to that as well."

This was part 12 in the series 'Andere Tuinbouwtijden'. A series in which a group of 'seasoned workers in the field' look back at times long gone. And in which we look at what their work did for the current horticultural industry. Tips for the series are more than welcome and can be mailed to info@hortidaily.com

Part 1: Piet Bom - Will your next greenhouse be made of Fiberglass?
Part 2: Henry van der Lans - We slept in the same little hotel...
Part 3: Rob Grootscholten – 42 years of greenhouse construction...
Part 4: Peter Stuyt – As a Dutch American, I like to combine...
Part 5: Leo Alsemgeest - Bit by bit a step back
Part 6: Harry Dullemans – Never say you are not there...
Part 7: Kees de Groot - We must make something different than...
Part 8: Leo Alleblas – The urge for adventure is in our blood
Part 9: Carel Zwinkels - “A grower needs to keep on developing in order to stay afloat in this market”
Part 10: Willem van Dorssen - "Willem, watch out for your shiny shoes!"
Part 11: Cees and Leo van der Lans - "If you want to do everything yourself, you will get nowhere"