Jordan Valley growers were struck with severe damage from a storm that shook their greenhouses and crops last weekend. This highlights the vulnerability of small and medium sized horticultural entrepreneurs.

Jordan was impacted with the cold front dubbed “the dragon” with gusts and winds up to the speed of 120 kilometers per hour. The dragon, caused severe damages to farmers especially in the Jordan Valley, with around 30,000 greenhouses damaged or destroyed, with estimated losses of millions of Jordanian Dinars. Farmers in the highlands were less impacted. Their damages were minor and easily fixed.

Through assessments conducted partners implementing Netherlands funded projects in Jordan, the damages at the partner farmers were the following: 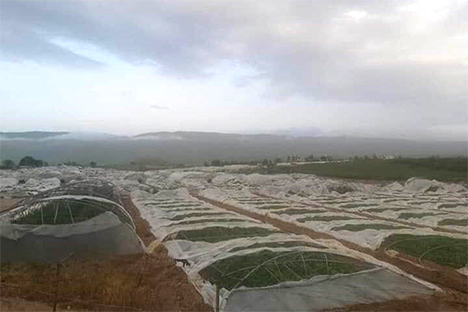 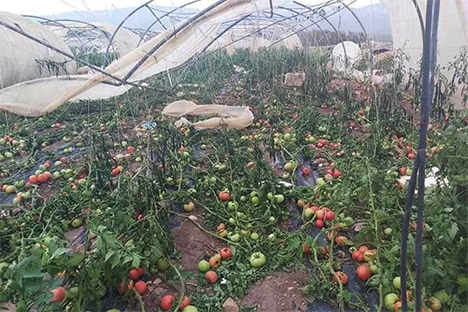 Status of crops inside the greenhouses, including damages by wind or rainfall

Many affected farmers have expressed their need to urgent cash assistance. The Jordan Valley Farmers Union expressed that “any farmer who suffered damage and does not receive compensation might not be able to go back to working in the sector again”.

Plants in greenhouses for which the plastic sheets were uncovered have been exposed to the elements. Many crops have been lost, especially sweet pepper and cucumber. Tomato plants are somewhat more resilient and are thus less affected. Some farmers tried to scavenge the remainders of their production one day after the storm.

End of season
Most farmers in the Jordan Valley will not plant anymore because the season will end in May. However, one of the farmers who was preparing for an upcoming cultivation cycle for tomatoes after the weekend, has shifted to plant beans instead since the damage in his multi-span was too significant and requires time for fixing and for the preparation of new seedlings.

Consequently, prices on the local market jumped 3 or 4 fold the day after the storm but have since recovered slightly. Higher prices are expected for the upcoming few months, but that there still should be sufficient production for the local needs.

In view of the damages and losses that farmers have suffered, input suppliers are less willing to provide store credit for the affected farmers. They are uncertain if farmers will be able to repay. Hence transactions for input supplies are said to be mainly cash-based at the moment.

Fixing damages
Another issue is labour, who after the storm, have been asking 2 or 3 times their usual salary, upfront and in cash, for working on the farm and fixing the damages raised their salaries.

Stakeholders met shortly after the storm to discuss the storm damage in the Jordan Valley. Sector representatives urged the Government of Jordan to compensate farmers and find ways to support the sector. The government is exploring opportunities for compensation. For development partners this highlights the need for crop insurance to support resilience in the horticulture sector.