A group of students from NC State, one Delaware Valley University student and five NC State faculty and staff members left Thursday, March 5, for an experiential learning adventure in the Netherlands. The 10-day study abroad program allows students to learn about agricultural innovations, agritourism, agricultural policy and agri-food products in the Netherlands. 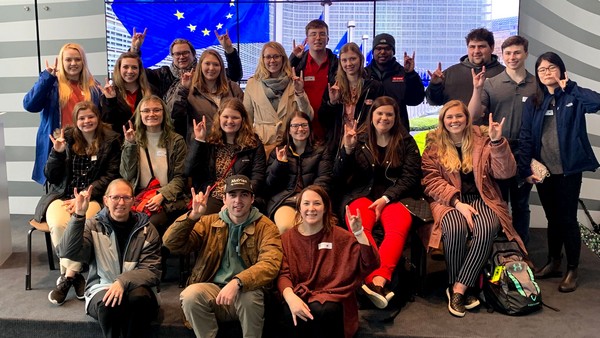 Before reaching the Netherlands, the group of 24 made their way to Brussels, Belgium. After wandering through central Brussels, soaking in the culture and food, students attended two lectures at the European Union Commission.

Students also heard from Dutch national Johan Van Gruijthuijsen regarding agriculture in the European Union and how it’s fundamentally different from that in the United States.

After spending the day in Belgium, the group bustled off to the Netherlands. The group visited Wageningen University and talked with Dorf Straathof, head of the Plant Sciences Research Department, about the university’s focus on research, government and business. Part of their visit included a tour of the Wageningen Greenhouse.

The group then made their way to Amsterdam, where they learned their trip would come to an unexpected end.

“At about 2:15 a.m. local time, we received the message that most of Europe was elevated to risk level 3 and that the president issued a travel ban starting on Friday. After some consideration, the university also sent us a come-home message. We packed quickly and got on the 4:47 a.m. train and to the airport just after 5 a.m.,” the group shared on their travel blog.

“One of our staff members and six students were able to get on a flight to Boston that left at 9:15 a.m. The rest of our group flew to Washington, DC,” said Melissa Hendrickson, program director and coordinator of the associate’s program in agribusiness management. “We were not able to get a flight from D.C. to Raleigh. We rented minivans and drove home. All of us arrived safe and sound.”

“This period brought us closer together as a group, and we were all watching out for each other,” said Ethan Renfro, a first-year student majoring in agricultural education. “We all had a truly amazing and incomparable time while abroad, and I think I speak for everyone when I say that it was an experience I will never forget and that I enjoyed deeply.”