Space lettuce found to be safe and nutritious

Astronauts in space generally live on processed, pre-packaged space rations such as fruits, nuts, chocolate, shrimp cocktails, peanut butter, chicken, and beef to name a few. These have often been sterilized by heating, freeze drying, or irradiation to make them last and a key challenge for the US Space Agency NASA has been to figure out how to grow safe, fresh food onboard.

In a new study in Frontiers in Plant Science,  Dr. Christina Khodadad, a researcher at the Kennedy Space Center, and co-authors report the successful cultivation of a salad crop – red romaine lettuce of the ’Outredgeous‘ cultivar – on board the International Space Station (ISS). They show that space-grown lettuce is free of disease-causing microbes and safe to eat, and is at least as nutritious as Earth-grown plants. This is despite being grown under lower gravity and more intense radiation than on Earth. 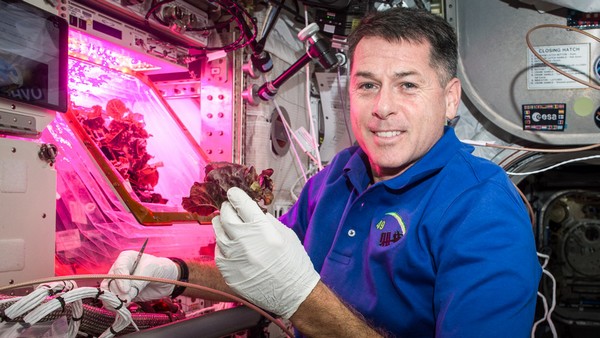 Nutritious and safe crops would be a dietary supplement to assist remote space missions. Image: NASA

Apart from a welcome change in diet, fresh produce would provide astronauts with additional potassium as well as vitamins K, B1, and C – nutrients that are less abundant in pre-packaged rations and tend to degrade during long-term storage. Additionally, growing crops would be especially useful on long-distance space missions, like the upcoming Artemis-III missions (scheduled to land humans on the lunar South pole by 2024), the current SpaceX programme, and NASA’s first crewed mission to Mars, planned for the late 2020s.

“The ability to grow food in a sustainable system that is safe for crew consumption will become critical as NASA moves toward longer missions. Salad-type, leafy greens can be grown and consumed fresh with few resources,” says Khodadad.

Between 2014-2016, lettuce was grown on board the ISS from surface-sterilized seeds within Vegetable Production Systems (nicknamed “Veggie”), growth chambers equipped with LED lighting and a watering system, specifically designed to grow crops in space. The crops grew undisturbed inside the Veggie units for 33 to 56 days, until crew members ate part of the mature leaves (with no ill effects!). The remainder was deep-frozen until transport back to Earth for chemical and biological analysis.

As a control, the scientists grew control plants on Earth under the same conditions, which was possible because temperature, carbon dioxide, and humidity data were logged on board the ISS, and replicated in the Kennedy Space Center’s laboratories with a 24-48 hour delay.

Space-grown lettuce was similar in composition to the Earth-grown controls, except that in some (but not all) trials, space-grown plant tissue tended to be richer in elements such as potassium, sodium, phosphorus, sulphur, and zinc, as well as in phenolics, molecules with proven antiviral, anticancer, and anti-inflammatory activity. Space- and Earth-grown lettuce also had similar levels of anthocyanin and other antioxidants, which can protect cells from damage by free, reactive oxygen radicals.

The researchers also examined the microbial communities growing on the plants. Typical Earth-grown plants harbour a diverse set of microbes. These may include specialized, beneficial guests called commensals (which neither harm nor benefit their host), or haphazard associates. Because these can affect the health of plants and their suitability as food, the researchers used next-generation DNA sequencing technology to characterize the communities of fungi and bacteria growing on the lettuce.

They identified the 15 most abundant microbial genera on the leaves and 20 in the roots, and found that the diversity and identity of these microbes was similar for space- and Earth-grown lettuce. This similarity was surprising, given the unique conditions in the ISS: the scientists had instead expected that these would favour the development of distinct microbial communities.

Importantly, none of the detected bacteria genera are known to cause disease in humans. Further tests confirmed that the leaves never carried any dangerous bacteria known to occasionally contaminate crops, such as coliform E. coli, Salmonella, and S. aureus, while the numbers of fungal and mould spores on them was also in the normal range for produce fit for human consumption.

The authors conclude that lettuce grown in space-borne Veggie units is safe to eat. These encouraging results open the door for experiments with other nutritious and tasty crops onboard the space station, to help propel astronauts further into space.

“The International Space Station is serving as a test bed for future long-duration missions, and these types of crop growth tests are helping to expand the suite of candidates that can be effectively grown in microgravity. Future tests will study other types of leafy crops as well as small fruits like pepper and tomatoes, to help provide supplemental fresh produce for the astronaut diet,” concludes co-author Dr Gioia Massa, project scientist at Kennedy Space Center.