Growing sopropo in a greenhouse

From January 1st, fans of the Surinamese vegetable sopropo, also known as bitter gourd, have been eagerly looking for the special, lumpy cucumber. A European ban on imports from Suriname and the Dominican Republic has dried up the supply of fresh sopropo.

There is Dutch cultivation, but it will not be available until late May, according to growers Ron van der Zwet and Steef Meewisse. "Our cultivation is also just a drop in the ocean when you consider that there are hundreds of hectares over there." 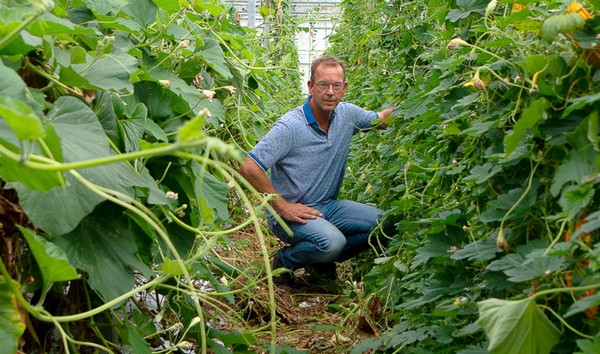 Ron among the sopropo. Photo from Magazine Green Health Solutions.

Many questions
Both Ron and Steef grow the Surinamese vegetable in the Netherlands, on a small scale. Together they barely have one hectare. Orders didn't come in non-stop, but there have been many requests. "There are already quite a few orders for this year," said Ron, who started growing in April last year on 4,000 square meters.

This year the acreage is smaller, despite the import ban. "Sales were somewhat difficult in 2019, because critical consumers still have to get used to the Dutch version of this originally Surinamese vegetable."

Small scale
Steef has been experimenting with cultivation for seven years now. He can therefore endorse Ron's story about the ‘invasive vegetable growing through the air vents in no time.’ “It is true that you are harvesting outside the greenhouse before you realize it. It is a difficult cultivation."

Frozen, also from the Netherlands
The import ban does offer opportunities. "Only Mexico is still supplying sopropo at the moment, but actually only because the Mexican government subsidizes the logistics," Steef states. "Without that subsidy it will also be difficult for them."

The Dutch consumer, who is now looking for sopropo, is dependent on frozen product for a while. "I currently have it in the freezer," Ron confirms. Suriname is also shipping frozen sopropo. The import ban only applies to fresh produce.

After the ban, a Surinamese grower has responded to the alleged ‘high demand for packaged sopropo’, and started processing at least 1,000 kilos a day. The first shipment to the Netherlands left on December 17.