"Despite little light, we immediately have a decent volume" 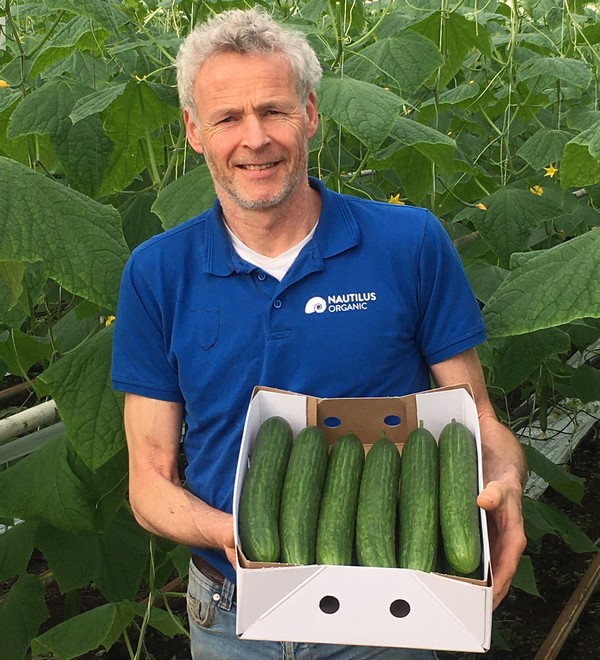 Recently the first organic cucumbers were harvested in the greenhouses of Dutch organic grower Frank de Koning. Despite little light, already early in the season there is a strong crop with good setting, so a substantial volume of about 3 to 4 cucumbers per square meter is immediately available. "That is really good for organic cultivation," according to grower Wim van Marrewijk.

The market is also looking good. “As it is looking now, there is already a fair demand for Dutch organic cucumbers. Last year the situation was completely different, when in the beginning it took a lot of effort to sell the product because a large quantity came from Spain. With the difficult circumstances in Spain this year it is different and so I expect that the product will be sold well in the market."

2.5 cycles
The organic cucumbers are not the first product that is harvested at Frank de Koning. Already in week 8 there were the ridge cucumbers, rather short, meaty cucumbers that are grown on 5,000 square meters for the English market. "No other Dutch organic grower has this variety."

This is different for the ‘normal’ organic cucumbers. These are grown at several Nautilus growers, the only one hundred percent organic producer cooperative in the Netherlands, and at Frank de Koning this year on 14,000 square meters, a good volume in organic terms, Wim confirms. “Our cucumber area is divided into three parts, with which we will have 2.5 crop cycles. We are going to change for the first time in week 16/17 and we will do that bit by bit, so that we remain in production.” 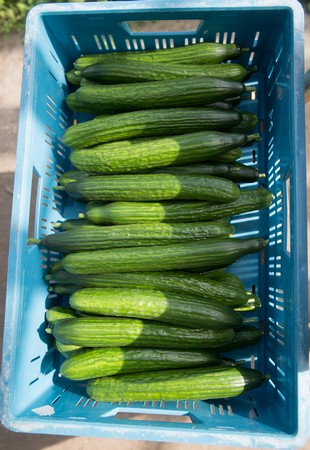 Naked
In recent years, the nursery has invested heavily in its own packing station. All organic vegetables from a total of 11.5 hectares spread over four locations are taken here to be packaged in accordance with the strictest international packaging requirements.

But that does not apply to all cucumbers. “We seal them in part with bio-plastic, especially for British customers, although they also look at flow packaging, which we are also working on. Yet the majority is still not packed and that is for the Netherlands and Germany."

Silicon is not bad
Once in the store, the consumer can often recognize an organic cucumber by the silvery silicon layer. “That is not a residue, as consumers might wrongly think, but a natural protective substance that organic cucumbers deposit on their skin because they simply absorb much more nutrients from the soil with the roots than conventional cucumbers that are grown on substrate. Organic cucumbers are often also somewhat firmer and tastier, also because of the larger mineral intake.”

Stronger crop every year
Wim is a grower, and so he is also very aware of the condition of the cultivation - Demeter cultivation. That is the somewhat stricter certification than the regular Skal certification that Dutch organic growers need. “With the Demeter certification, for which there is an increasing demand in more and more countries, we can differentiate ourselves. Everything is really about a good, strong soil, and by sharpening the details every year, the crop is on average stronger every year.” 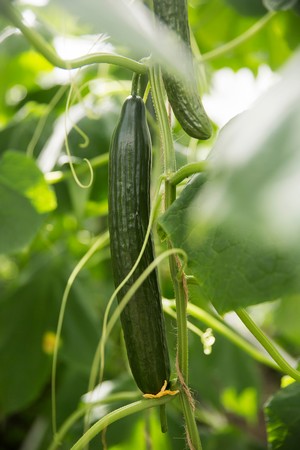 Mixed compost
A stronger crop was also seen this year, even despite a dark spring, partly thanks to two improvements in cultivation, Wim explains. "The one detail is that we have started to mix compost since last year, so that the nutrients in the soil are gradually released throughout the year and not like green compost, mainly in the first four months."

Preventing lazy roots
And the other detail? "That is that we checked whether we could also stimulate the plant itself to become stronger and to have it grow more and better roots. Drilling a larger, deeper plant hole in which the roots first grew down well was step one.

"Step two, and we started doing this this year, is no longer putting the dripper in the press pot, but right next to it. The plug is often quite wet anyway and by removing the dripper and pouring it once or twice we now have an even stronger root system and a more active plant. So we are ready to have sunshine."