Greenhouses are big business in Russia

Greenhouses turn out to be the most profitable sector in agriculture in the Russian Federation. This business sector has attracted investors after the Russian ruble devaluation and the product embargo. 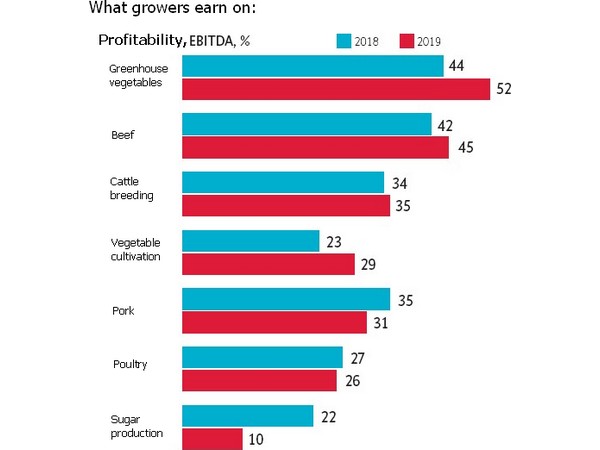 The Russian Agricultural Bank analyzed what agricultural spheres are most profitable. The analysis was based on the bank's calculations, following reports provided by credit users for the four quarters ending with October 31, 2019. There are 11,000 agricultural enterprises among the bank’s clients.

Big business
The experts evaluated that greenhouse growers have the highest EBITDA among all the agricultural producers: it increased by 8% over the year, ending up at 52%.

The greenhouse business started growing rapidly after a product embargo had been introduced and the Russian ruble had devaluated in 2014, explained a representative of the bank. The market leader, Eco-kultura, have increased their greenhouse acreage. The son of Russian oligarch Roman Abramovich, Arkadiy Abramovich, engaged in greenhouse construction, and companies close to the owner of the auto dealer Avilon (GC Moyo Leto) got interested in the sphere too.

Productivity
High productivity of modern greenhouses enables their profitability, considers the bank's representative: it is possible to get up to 80 kilos of crops per square meter, and the prices of vegetables, especially out of season, in winter and in early spring, are rather high. Microgrids for greenhouse heating and lighting contribute to the profitability as well, the investors who constructed them can boast even higher numbers, mentioned the representative.

On the road to self-sufficiency
The investments in greenhouses in 2015-2019 exceeded 2.8 billion euros, over 1100 ha of new greenhouses were allocated, estimated the director of the National Union of Fruit and Vegetable Producers, Mr. Mikhail Glushkov. Russia is now self-sufficient in cucumbers, however 40% of tomatoes are still imported.

Greenhouses in 2015-2017 were one of the most profitable sectors of the agricultural business, confirmed a partner of NEO Center, Ms. Inna Golfand. Currently, most of the greenhouses have a lower margin than that evaluated by the Russian Agricultural Bank, assured Mr. Glushkov. The margin was high, about 50% in 2017-2018, mentioned the director of the investment department of Eco-kultura, Mr. Yuriy Voronov. At those times, after the ban on imports from Turkey there was a deficit on the market. Currently, there are enough of the most demanded reasonably priced tomatoes, assured Mr. Voronov.

The top of the mountain?
There's a limit to growth, however. Has the top of the mountain been reached then? Greenhouse profitability EBITDA currently is 45% and is not growing, said Mr. Voronov. He also mentioned the negative influence of cancellation of capital investment compensation by the state.

In addition, greenhouse business profitability started decreasing because of competition, mentioned Ms. Golfand. Prices on vegetable remain on the same level and costs are increasing due to higher tariffs on electricity, noted the expert.

Profitability did not increase in the past year, supported the director of the managing company of agricultural holding “Moyo Leto”, Ms. Irina Meshkova. However, in the future, as Mr. Voronov hopes, with the growth of popularity of premium class vegetables, the margin may reach previous levels.

In general profitability in the agricultural sector in the Russian Federation is increasing, thus investors are attracted by the sphere, mentioned the first deputy chairman of the board of directors of the Russian Agricultural Bank, Ms. Irina Zhachkina.