BerryWorld Australia has begun picking its first Tasmanian-grown raspberries, with the Orielton region now the third to enter production since joint venture partner Piñata Farms established the growing arm in 2016.

BerryWorld-branded premium raspberries are also produced in winter at Wamuran and in summer at Stanthorpe, Queensland, taking advantage of the climatic variations of each region to spread the harvest out.

Managing director Gavin Scurr said Tasmania's initial season would run until May with the next harvest resuming by November this year.

"Going forward, the season will run from November to May," he said.

The farm is expected to reach full production by 2024. 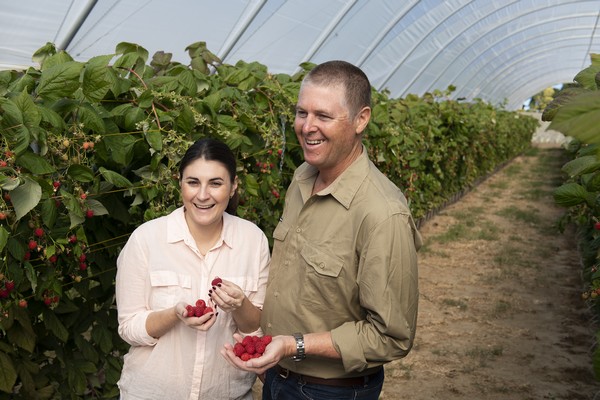 Operation redeveloped for horticultural use
"The Tasmanian operation includes some 30 tunnels in production and a high-tech packhouse featuring the only heat-sealing machine we know of in Tasmania," he said.

It has provided jobs for up to 25 people, including seasonal backpackers.

The farm, north-east of Hobart, was previously used for agricultural purposes. Redevelopment included extensive earthworks to achieve the right slope for optimal drainage, construction of polytunnels with customisations such as wind doors, connection to the South-East Irrigation Scheme to ensure a stable and reliable water source and construction and fit-out of a high-tech packhouse.

"Orielton was selected because it is warmer and drier than other Tasmanian raspberry growing regions. It is also a traditionally windy area and wind impacts are mitigated by growing raspberries in polytunnels."

The first small volume of berries has been distributed to selected Woolworths stores in Tasmania. All fruit is picked and packed on site.

"Once the volume increases, fruit will be shipped daily by ferry from Devonport to Melbourne for Woolworths' distribution," Mr Scurr said.

Over time, BerryWorld Australia could supply the East Coast with raspberries, he said.

BerryWorld-branded berries are produced exclusively in Australia by Piñata Farms under a joint venture with UK-based BerryWorld Group. Piñata Farms is the only producer to have access to BerryWorld's exclusive and world-leading berry genetics.