Plants have always battled various pressures, from diseases and insects to adverse environmental conditions. But increasing occurrences of more extreme weather events and a growing world population are resulting in the need to develop even hardier crops for the global food system.

Researchers in the Michigan State University Plant Resilience Institute (PRI) are studying how these intensifying environmental impacts hinder plants’ ability to adapt, and how those impacts might be mediated or averted.

Gregg Howe, a University Distinguished Professor in the Department of Biochemistry and Molecular Biology, was part of the research team that started the process to form the PRI in 2015.

“We wrote a proposal and started to lay the groundwork as a nice fit to our plant science and agriculture roots,” he said. “The idea was to use this as seed funding to get projects off the ground and to make ourselves more competitive for external funding opportunities in the area of plant resilience. We saw this as a way to make MSU’s strength in plant research even stronger.”

Howe was joined in the effort by founding director Mike Thomashow, along with Sheng Yang He and Brad Day, professors in the Department of Plant, Soil and Microbial Sciences (PSM). Initial funding came from the Global Impact Initiative, MSU AgBioResearch and the colleges of Agriculture and Natural Resources, and Natural Science. 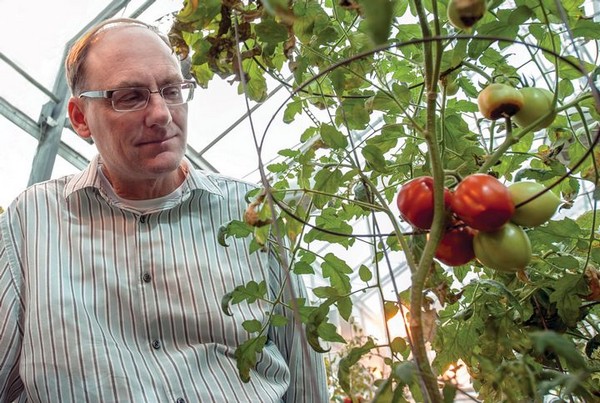 Gregg Howe, a University Distinguished Professor in the MSU Department of Biochemistry and Molecular Biology, is a founding member of the Plant Resilience Institute.

Three areas of emphasis were outlined: the performance of plants in the presence of rising temperatures; the role of microbial communities in plant resilience; and the improvement of legumes, important international crops facing increasing stresses.

Soon after its launch, the PRI added the following faculty members:

Buell said multidisciplinary teamwork is the key strength of the PRI.

“The PRI allows us to develop connections we otherwise wouldn’t have,” Buell said. “Faculty members from different departments who share research interests can interact through a number of forums and seminars the PRI hosts, setting the foundation for collaborative research.”

Creating the largest impact
A founding goal of PRI was to concentrate on research topics with the broadest reach, such as rising temperatures and their impact on plant growth and health.

Howe recently started examining temperature and its relationship to how plants defend themselves from insects. He has tested the immune system function of tomatoes under two temperature scenarios, both with insect predation occurring: just over 82 degrees Fahrenheit and an elevated temperature of over 100 degrees Fahrenheit (the latter is similar to in-season growing conditions in Florida and California).

Howe found that the tomato plant growing in 100-degree heat is more susceptible to attack. Insect metabolism speeds up, making them hungrier. At the same time, the pores on the leaves that usually open to release water and cool the plant stay closed.

“We don’t know why the stomata [pores] are staying closed or if it has to do with the feeding insect, so that’s something we have to explore further,” Howe said. “What we do know is the plant is losing valuable tissue to the insect and isn’t cooling itself. This is obviously bad for overall plant health.”

Howe’s lab also studies jasmonate, a defense hormone that signals the plant to repair tissue damage. Under elevated temperatures, the plants produce more of the hormone, but the increase is inconsequential in the fight against insects, Howe said.

He also pointed out the importance of varying research within PRI.

“The PRI started with basic research, but we’re moving into some applied research as well,” Howe said. “Most of what we’re working on are long-term problems, but we want to be flexible if there are opportunities to tackle short-term needs.”

Thompson, one of the PRI’s newest members, uses genomics, spectral imaging (high-quality remote images from drones) and modeling to study maize genetics and how different varieties perform in various environments.

In summer 2019, she embarked on a project with Martin Chilvers, an associate professor in PSM, and Maninder Singh, an assistant professor in PSM. The trio is examining corn tar spot, a fungal disease that has emerged across the Midwest in recent years.

Known in elevated regions of Mexico and Central America for more than a century, tar spot favors cool and wet conditions. Little is known about the fungi that cause tar spot, and commonly sprayed fungicides have shown minimal effectiveness. Many Midwestern operations have been devastated in the absence of adequate treatment options or disease-resistant varieties.

Thompson is tracking disease incidence and severity in hundreds of maize varieties, using both traditional ratings, such as in-person scouting, and drone imagery to monitor the plants. She is looking for cultivars that display disease resistance traits. Using genomics techniques, Thompson can then identify which genes are responsible for resistance and work to incorporate them into modern high-yielding varieties to make them less susceptible to tar spot.

Chilvers specializes in plant pathogens and is attempting to uncover more about the fungi that cause the disease and testing fungicide efficacy. A field crops agronomist, Singh is exploring whether planting density or other management practices contribute to disease transmission.

“It’s great to be a part of a project in which scientists from different backgrounds are coming together to solve a single problem,” Thompson said. “The PRI provides support to do this type of work, both resources and opportunity.”

The project, which is also funded by Project GREEEN and the Corn Marketing Program of Michigan, is one of the first to focus on corn. Thompson was brought to the team to add her knowledge of maize genetics and expand the scope of PRI plant research.

Studying an even wider range of plants was part of the constructive feedback from a May 2019 evaluation of the PRI’s progress by a scientific advisory committee. Buell said the committee came away impressed, and its feedback included continuing outreach to establish a more recognizable identity.

“It was nice to have a third party assess our work and confirm that we’re on the right track,” Buell said. “We know that we can’t possibly analyze all facets of plant resilience, but there are plans to continue the growth of our team, and that’s exciting for the future.”

This article was published in Futures, a magazine produced twice per year by Michigan State University AgBioResearch. To view past issues of Futures, visit www.futuresmagazine.msu.edu. For more information, email Holly Whetstone, editor, at whetst11@msu.edu or call 517-355-0123.