'The availability of cucumbers increased marginally'.

In the case of the snake cucumbers, Spanish goods dominated over the Greek shipments. Only complementary products came from the Netherlands and Belgium, but these were usually light quite small. The availability increased marginally. As a result of the increased prices of the previous week, customers tended to buy the products only sparsely from Monday onwards. In the course of the day, retailers tried to speed up the turnover by offering discounts, but this did not always work out.

In Berlin, the food retailer's campaigns also caused a rather weak market business. As the temperatures in Spain were too low, the sellers did not expect a considerable intensification of deliveries for the 6th week either. Nevertheless, they granted slight discounts. Shipments from Turkey and the Netherlands completed the range on a small scale. Prices often tended to drop a little. In Hamburg, the distributors of Dutch products called for € 24 per 4-kg package, which caused sales to stagnate. 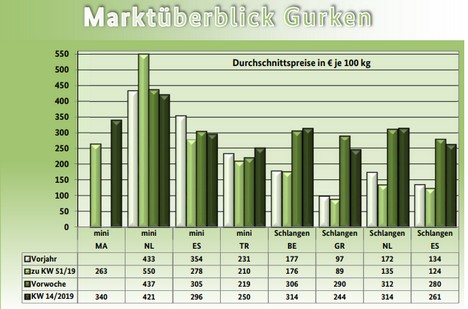 Apples
Domestic fruit dominated the market. The sales were quite relaxed, in general. The demand could be satisfied without problems.

Pears
Italy ruled the market with its Abate Fetel, Santa Maria and Williams Christ. The not very strong demand was satisfied without any difficulties. The overall quality of the goods left little to be desired.

Table grapes
South African imports were dominant: Prime Seedless, Thompson Seedless and Sugraone were the most important ones. The organoleptic properties were mostly convincing. In some places, the turnover only accelerated towards the weekend.

Oranges
In the case of the blonde oranges, Spanish deliveries determined the course of events. In general, the quality rarely left anything to be desired. Demand was disappointing from time to time, but this did not have a serious impact on the prices.

Small citrus fruits
The presence of clementines was continuously limited. Only a few Spanish, Italian and Moroccan lots were still looking for buyers; their condition was not consistently convincing.

Lemons
Spanish Primofiori dominated events, more so than Turkish Enterdonato. Although deliveries were generally limited, they were sufficient to satisfy the constant demand.

Bananas
On the whole, the supply correlated to a large extent with the accommodation possibilities. Nevertheless, the majority of prices moved upwards.

Cauliflower
Italian and French inflows were the main sources of supply. There were also Spanish and Belgian supplies, but these were not always convincing in terms of quality.

Lettuce
Lettuce came in most often from Belgium and Italy. Business went smoothly and the prices remained stable for the most part. They also climbed at certain points, at those places where demand was higher.

Tomatoes
A wide range of products was available. The supply had expanded. At times, the quality of the goods left a lot to be desired; there were mentions of too soft meat or insufficient colouring. This led to a rather wide price range establishing itself.

Sweet peppers
Spanish deliveries apparently increased and dominated the scene. Supply and demand were generally in balance, so that distributors were rarely forced to modify their previous prices.