The indoor farming industry has been rapidly expanding. With that, we are seeing innovations in design, technology, and products. A principle of indoor farming is around how food can be grown while using land, space, and resources efficiently. In New York City, space is certainly limited and we’ve seen urban farms utilize space in innovative ways. Some examples include rooftop farms like Brooklyn Grange, indoor usage of small spaces like Farm One, and floating demonstration farms like Swale. 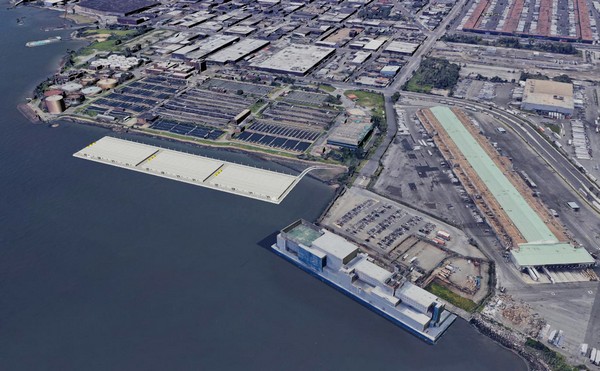 Cities that are surrounded by water have been constructing their coastal areas to build structures that are resilient to storm surge. Aqua Ark, an experienced developer for building commercial and residential water-borne structures, believes in the concept of floating cities. Aqua Ark’s most recent water-borne venture is constructing the largest farm in New York City. The developer is building a 158,000 square foot floating farm structure located off the Hunts Point food distribution center in the Bronx. The facility provides up to 4 acres of horizontal growing area, a scale otherwise unattainable in NYC. This is a unique opportunity for farm operators to grow food in such close proximity to the largest food distribution center in the world. The proximity to Hunts Point reduces the impact of transport costs and environmental costs for produce deliveries. 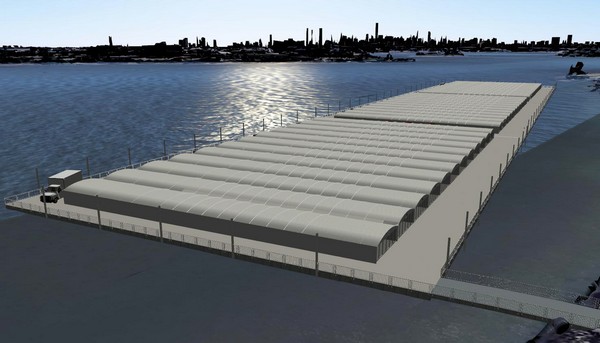 Being a coastal city, New York City is susceptible to flooding and stormwater surge. The city is still rebuilding from the aftermath of Hurricane Sandy in 2012. The storm brought to light the realities of climate change and rising sea levels for developers and urban planners. The hurricane highlighted Hunts Point distribution center's “vulnerability to rising flood waters and to power outages that could be caused by extreme heat waves or infrastructure failures.” Thus, Hunts Point has become a priority zone to invest in the area and protect it from multiple risk factors. The City of New York has made coastal protection the top priority for the Hunts Point resiliency project. The Waterborne Farm facility was designed to withstand the effects of storm surge. During extreme surges the facility rises, staying secured in place until the surge recedes ensuring no structural damage will occur.

The water environment also provides benefits for energy savings from reduced heating and cooling costs. Through water mass heat pumps and the possible use of extra heat from a nearby water treatment plant, savings of 30-70% on heating costs and 20-50% on cooling costs are feasible, as shown by data from the United States Environmental Protection Agency. The energy efficiency of the facility is specifically important for this region which suffers from the highest levels of air pollution in New York City. Additionally, because this site will be located on the water, there are minimal obstructions to natural light, a benefit that brings with it more potential cost savings. 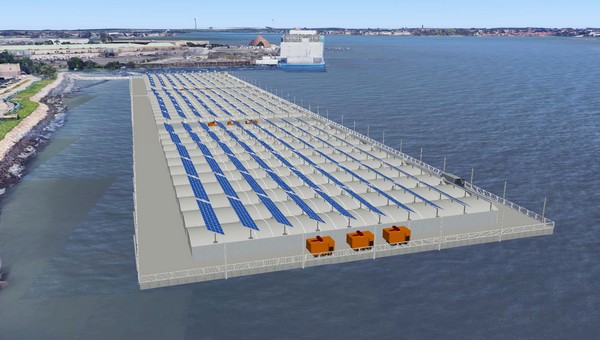 Aqua Ark is seeking applicants from potential farming operators around the world wishing to lease the facility. The facility is a blank canvas where Aqua Ark is willing to work with the tenant to customize a design to accommodate any type of indoor farming operation, whether that’s a vertical farm, greenhouse, aquaponics or another growing system.

To be eligible, you must have experience opening and operating a large scale indoor farm and or qualifications of staff and supervision to manage and maintain a class A indoor farm proof of financial viability.