visit to Tomatoworld to learn from the Dutch

On Thursday January 16th, Tomatoworld received the Japanese ambassador Hidehisa Horinouchi together with members of the Japanese House of Councillors and the Ministry of Agriculture. They are engaged in the revitalization of agriculture and horticulture in Japan and the reconstruction of northeastern Japan after the 2011 tsunami.

Mayor Bouke Arends was present on behalf of the Westland municipality. He emphasized that the municipality has a good relationship with Japan and in particular with the prefecture of Kochi for many years.

Arends: “The municipality of Westland has a relationship with the prefecture of Kochi in Japan since 2009 with the aim of improving agriculture and horticulture in Japan and increasing the opportunities of Westland entrepreneurs in this country. As a result, many ministers, universities and companies from Japan have visited the Westland municipality and our business community has achieved an excellent starting position in Japan. That is why we cherish these contacts." 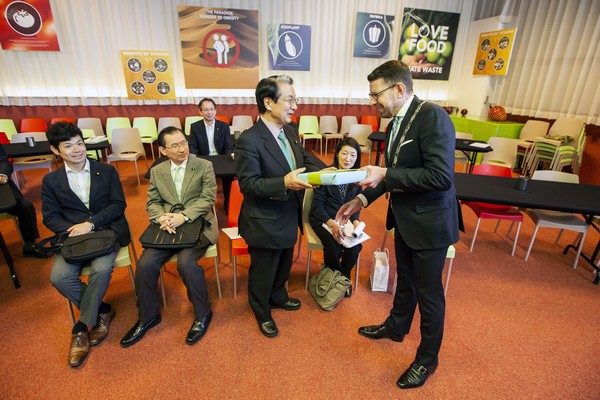 Challenges
Climate change is a major threat to food supplies for Japan. Typhoons, earthquakes, floods and rising temperatures have a major impact on food supplies in Japan. In the coming years, the Abe Cabinet wants to invest millions of euros in Kochi in order to transform the underdeveloped agricultural and horticultural sector into a productive sector capable of increasing self-sufficiency.

Japan currently produces 38% of the calories that the Japanese population needs. And 64% of the total volume. With an import value of € 60 billion, Japan is one of the largest food importers in the world.

Dutch horticulture sector as an example
As the second largest exporter of food products, the Netherlands is also attracting attention in Japan. The delegation is visiting our country to see examples of the innovative approach that has led to this success.

In the Tomatoworld greenhouse, the delegation was informed about the cultivation method for healthy products. The control of the greenhouse climate with the computer, the irrigation system and ventilation fans received special attention. The present partners of Tomatoworld informed the delegation of the latest innovations in this field.

Thanks to our relationship with Kochi and the increasing need for Japan to modernize agriculture and horticulture, the Japanese Cabinet sees the Netherlands as a prime example. Westland companies can benefit from this.