Liu He: "Agreement is rooted in equality and mutual respect"

US and China sign deal to ease trade war

The US and China have signed an agreement aimed at easing the trade war that weighed heavy on the global economy. Speaking in Washington, US President Donald Trump said the pact would be "transformative" for the US economy. Chinese leaders meanwhile called it a "win-win" deal that would help foster better relations between the two countries.

China has pledged to boost US imports by $200 bln above 2017 levels and strengthen intellectual property rules. In exchange, the US has agreed to halve some of the new tariffs it has imposed on Chinese products.

However the majority of the border taxes remain in place, which has prompted business groups to call for further talks. The US and China engaged in a tit-for-tat tariff war since 2018, which has led to extra import taxes being levied on more than $450 bln (£350 bln) worth of traded goods. The ongoing dispute has disrupted trade flows, dampened global economic growth and unnerved investors.

'Righting wrongs'
At a signing ceremony in Washington, attended by top Republican donors and business leaders, Trump said the deal sets the stage for a stronger relationship between the US and China: "Together we are righting the wrongs of the past and delivering a future of economic justice and security. Far beyond even this deal, it's going to lead to an even stronger world peace.

Commitments
According to a BBC article, China has committed to increasing its US imports by at least $200 bln over 2017 levels, boosting purchases of agriculture by $32 bln, manufacturing by $78 bln, energy by $52 bln and services by $38 bln. Also, China has agreed to take more action against counterfeiting and make it easier for companies to pursue legal action over trade secret theft 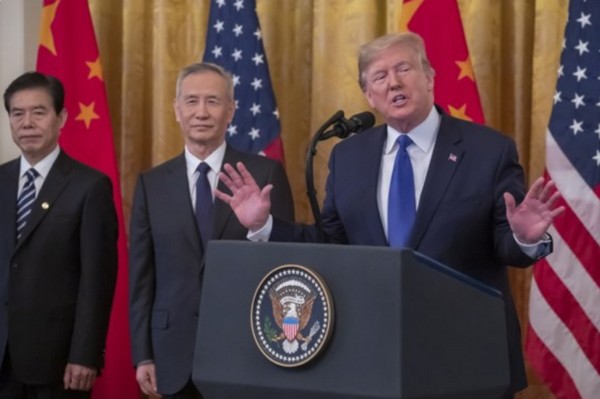 Chinese Vice Premier Liu He, who signed the deal on behalf of China, said the agreement was rooted in "equality and mutual respect" and defended his country's economic model in his remarks. "China has developed a political system and a model of economic development that suits its national reality," he said. "This doesn't mean that China and the US cannot work together. On the contrary, our two countries share enormous common commercial interests.We hope both sides will abide by and keep the agreement in earnest."

Winners and losers
Tariffs - in some cases at a lower rate - will remain in place. Analysts told bbc.com it's unlikely that the deal will produce gains sufficient to outweigh the losses already suffered.

Winner: Donald Trump
Some critics say there is little substance, but the signing offers an opportunity for US President Donald Trump to put the trade war behind him and claim an achievement heading into the 2020 presidential election.

That may be a relief: Polls show that most Americans agree with the president that China trades unfairly, but they generally support free trade and oppose tariffs. Indeed, Republicans lost several congressional seats in 2018 - a change economists have linked to the trade war.

a appears set to emerge from the signing having agreed to terms it offered early in the process, including loosening market access to US financial and car firms. In many cases, companies from other countries are already benefiting from the changes.

While President Xi can claim he did not simply bow to America's demands, that doesn't mean the Chinese are celebrating. The Federal Reserve estimates that China's economy has taken a 0.25% hit, as US demand for its goods fell by about a third.

Loser: American companies and consumers
The US has collected more than $40 bln in new tariffs. The new deal halves tariff rates on $120 bln worth of goods, but most of the higher duties - which affect another $360 bln of Chinese goods and more than $100 bln worth of US exports - remain in place. And that's bad news for the American public.

Economists have found that the costs - more than $40 bln so far - are being borne entirely by US companies and consumers. And that figure does not even try to measure lost business due to retaliation. Overall, the Congressional Budget Office estimates that tariff-related uncertainty and costs have shaved 0.3% off of US economic growth, while reducing household income by an average of $580 since 2018.

The CBO's estimates take into account all new tariffs imposed since January 2018 - not just those involving China - but analysts say a more limited look would yield similar findings.

Loser: Farmers and manufacturers
Manufacturers exposed to tariffs have been hurt. The new deal commits China to boost purchases in manufacturing, services, agriculture and energy from 2017 levels by $200 bln over two years.

Trump has said that could include as $50 bln worth of agricultural goods a year. But the official figures are lower, analysts are sceptical those are attainable and China has said the purchases will depend on market demand. So far, the primary effect on business has been pain. 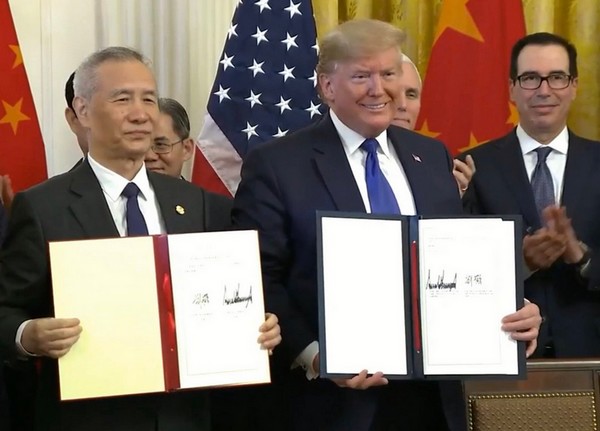 Fragility of the truce
Analysts who are still seeing more tariffs as a possibility define the trade truce as ‘fragile’. An article on cnbc.com talks about remaining tensions between the US and its trading partners.

“There will be continued tension over China — over cyber, over national security, over human rights. Those issues aren’t going to go away, but those issues don’t really matter to the earnings of the S&P 500 companies the way an escalation of tariffs would,” said one strategist.

The “phase one” trade deal between the U.S. and China ends some uncertainties for the global economy, but tensions between the U.S. and its trading partners could continue, even with the reprieve. Analysts also expect trade skirmishes to crop up elsewhere, and they expect the Trump administration could have Europe in its sights for its next round of tariffs.

Stocks were higher Wednesday, as President Donald Trump signed the trade deal with Chinese officials shortly after noon East Coast time. The market has been boosted by the prospects for trade peace and the end of escalation in the dispute between the two countries, which until October appeared to be moving forward on new tariffs and counter tariffs.

86-page trade agreement
The 86-page trade agreement is said to include provisions that China will be purchasing an additional $200 billion in U.S. goods over the course of the next two years.  The deal provides for specific agricultural purchases during that time-frame between $40 billion and $50 billion. It is importantly going to include fresh fruits and vegetables, and nuts.  It’s going to have to include that if China is going to reach their commitment of getting up to that $40 billion to $50 billion.

The USDA will be monitoring the progress made by China in meeting its commitment level for agricultural purchases moving forward, with enforcement mechanisms contained within the agreement.

U.S. apple industry expects to export more volumes to China
USApple Chairman Jeff Colombini stated: “It was a real honor for USApple to be invited by the White House to this important ceremony,” said Colombini, a third-generation California grower and president of Lodi Farming, Inc. “The agreement in which China is committing to large purchases of U.S. agriculture products is positive news. The U.S. apple industry very much wants to supply that market.”

The U.S. apple industry finally achieved full access to the Chinese market in 2015. Exports grew to 2.5 million boxes per year making China the apple industry’s sixth largest export market. But, according to USApple, continued retaliatory tariffs—now at 50 percent—imposed by China on U.S. apples, on top of already existing 10 percent tariffs, preclude growers from getting back into the China market. This is a substantial concern for the industry as China was an emerging market and one the industry viewed as having significant growth potential. USApple is optimistic that the signing of the U.S.-China agreement will help pave the way toward removal of the tariffs.

“We look forward with expectation that China’s retaliatory tariffs on our apples will be removed,” said USApple President and CEO Jim Bair. “China doesn’t grow the new and exciting varieties we do, and we know their consumers want them, so we’re ready to roll.”

"We expect increased grape and stone fruit sales to China in the future"
The California Fresh Fruit Association Chairman Giumarra stated, “This is a promising first step which we are confident will result in lower tariffs and increased grape and stone fruit sales to this valuable market. In 2018, the table grape industry experienced an $80 million decline in crop value, primarily due to the impact of the trade war with China. Additionally, in 2018, California plums saw a $28 million decline as a result of the Chinese tariffs. While the agriculture industry looks forward to a permanent solution that allows us to increase exports to this growing market, we believe Phase One will help farmers. This, in turn, generates more rural economic activity and promotes job growth. Our members look forward to working with the administration to find the final resolution that is good for our country and for American agriculture so we can ship fresh, healthy fruit to consumers in China and the rest of the world.”

WGA optimistic deal will expand access to China
Chairman Talley issued the following statement: “While American farmers have borne the brunt of the trade war with China, with the overall U.S. exports of fruits, vegetables and tree nuts to China declining by double-digits over the past two years, we are optimistic that with the completion of phase one, and the future completion of phase two, U.S. specialty crop farmers will be able to achieve expanded access to, and financial gain from, this valuable Asian market.”

Western Growers President & CEO Tom Nassif added the following statement: “We applaud the Trump Administration for securing resolutions to specific sanitary and phytosanitary (SPS) issues, which will open up the Chinese market to commodities like avocadoes, blueberries, nectarines and potatoes. Looking ahead, we remain committed to supporting the Administration’s efforts to secure broader reforms to China’s SPS regime, which continues to stymie access for other U.S. specialty crop products.”

“Exports will grow by $200 billion over next two years”
President and CEO of the Agricultural Retailers Association Daren Coppock released the following statement in support of the agreement: “This agreement will boost U.S. goods and services exports to China by a reported $200 billion over the next two years. That level of economic growth cannot be understated.”