600 bars of a peach-scented soap

The owner of the Potato Soap Company on Prince Edward Island has come up with a new soap he thinks will appeal to some customers from the US.

Pieter IJsselstein has produced 600 bars of a peach-scented impeachment soap, intending to inject some humour into the political news coming out of Washington. The US House of Representatives impeached President Trump on December 18 for abuse of power and obstruction.

IJsselstein said he went online to find out if anyone was making an impeachment soap. When he found people comparing the proceedings to a soap opera, he figured he was on to something. "There is lots of references to soap so I thought it would be a neat idea to use that word soap and turn it into an impeachment soap.” 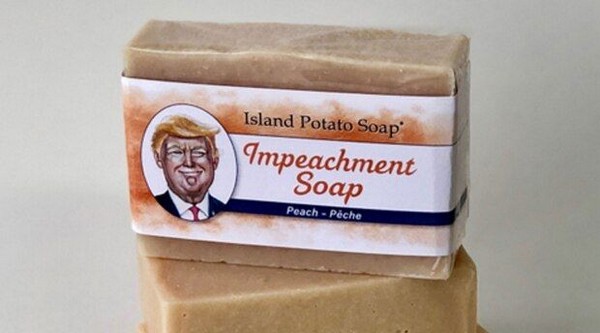 IJsselstein said the response to the new soap has been good, especially with people looking to buy gifts for relatives who are big Trump supporters. "My son-in-law actually put a sample of it online and immediately got a sale," he said.

Democrats as another possible creation
IJsselstein said he isn't political and created the soap as a humorous word play. He's now thinking about whether to create some sort of soap with Nancy Pelosi, the Speaker of the US House of Representatives, on the wrapper. "I'll just see how the impeachment soap goes first," he said. He has a feeling news about the soap could travel fast through social media, and he will be swamped with orders.

"It's amazing how many US customers we have. We get orders on a daily basis now. I think we get a fairly large number of tourists from the U.S. and I am pretty sure they are going to snap up this soap very quickly."