If you want to be sustainable, you have to get your hands dirty. At Van Krimpen, one of the major suppliers of cultivation pots in the southern region of the Netherlands, they started collecting and recycling plastic themselves seven years ago. Trucks full come in every day, while on the other hand large bags of finely ground, clean pieces of plastic are delivered, the raw material for new injection moulding jars. "We're not making more plastic, we're recycling." 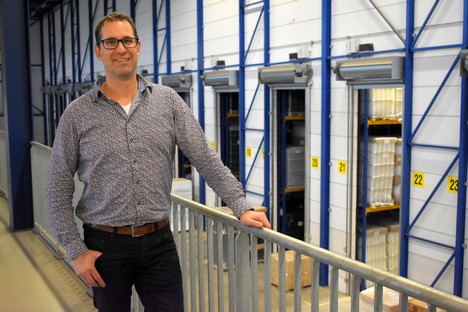 We speak with representative Jorg Swagemakers at Van Krimpen's company in Standdaarbuiten, West-Brabant. There is a large warehouse that offers space for about 7400 pallets and from where the deliveries are made to customers. This hall was put into use seven years ago, "built on growth but already too small". Right next to the warehouse is the recycling plant, where the collected material is shredded and washed. The pots themselves are produced elsewhere. A whole year has to be produced (in advance) in order to be able to cope with the peak months from March to May. As soon as the chance of frost has passed, the consumer goes into his garden, the plant and tree growers deliver their products and then have to start growing plants again for the next period. Practically all transport, of both the granules and the products, then takes place under their own management.

Take a look in the warehouse

Innovation
Van Krimpen claims to be very strong in the development of new, innovative products. More than 90% of this product development takes place at the request of, and in close cooperation with, the grower. In this way, beautiful, distinctive and often advantageous products are created. "For your information, the costs of a mould start at around 40,000 euros and can amount to up to 3 tons. If we think that the market demand is there, we often buy the mould ourselves. But it can also be paid for partly, or even entirely by the grower, giving the grower a certain or even complete control over the production of a specific pot." 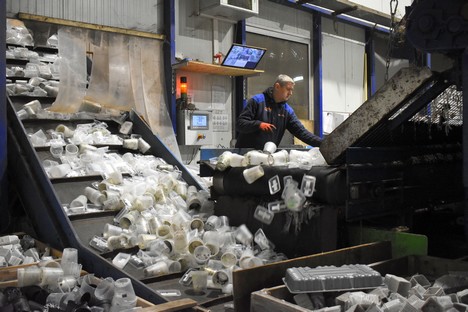 The plastic is dumped on a conveyor belt, after which it is transported to the shredder.

Recycling
Recycling is the theme in the plastic sector, which today is often the head of jute. Crucial here is a solid collection and the technique to separate different types. The market has taken steps in this direction, which make it possible for Krimpen to offer the materials it needs on a silver platter. For the technicians, this mainly concerns PS, PET and PP. PS is polystyrene, used for example for Normpack trays. PET is polyethylene terephthalate, a strong material from which the cola bottle is made and which is also used for tray production, and PP is polypropylene, which is used for the production of pots and therefore has the largest share. "What distinguishes us is that the plastic we use as a raw material for the injection moulding of new pots, in addition to what comes back from our customers, is 100% PCR. In other words, the type of plastic that consumers throw away every day. Most products are made from 100% PCR material and to get certain colours we add dyes". 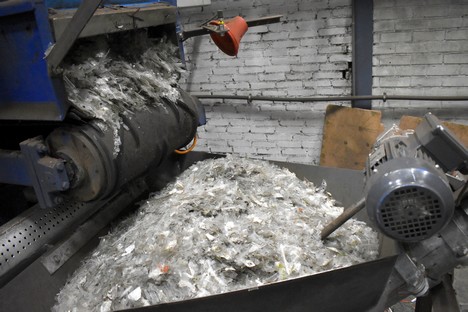 The grinding is done in two steps. First a coarse one -

Detectability
A second major focus is on detectability. You have to know what's inside if recycling is to be possible at all. What retail chains demand and what can be imported and exported is therefore becoming increasingly strict. For example, recently introduced rules in the UK and Scandinavia that stipulate that products that are not NIR detectable, i.e. where it is impossible to determine what type of plastic it is, cannot be accepted. Waste sorting by means of NIR is a nice technique, but it brings with it one big problem. A lot of plastic contains the dye carbon, which is black, and which absorbs the infrared rays. It is then not possible to determine which type of plastic it is. Then it does not qualify for recycling. The solution is to use dyes other than carbon. "That's possible, but not everyone can do that. We have spent a long time trying to find the right recipe for the various colours," says Jorg. "The exact recipe is the creator's secret. We now make dozens of detectable colours. And for many of them, we also have the well-known "Cyclos" certificate." 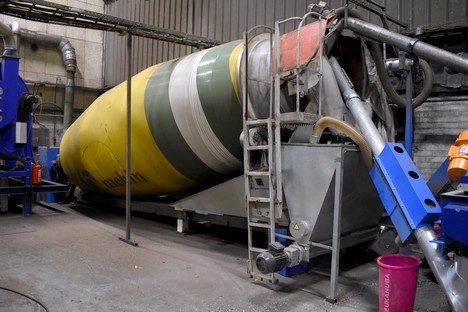 - This is washed, in this turbine, without a drop of water -

Not waste, but raw material
Without necessarily wanting to be the most virtuous, Van Krimpen does not allow himself to be overwhelmed by the current negative reporting on plastics. "That we don't want to bring a new plastic into the world and that you have to recycle, we have been finding and doing this for a very long time. However, it is only in the last few years that we have become more active in doing so. 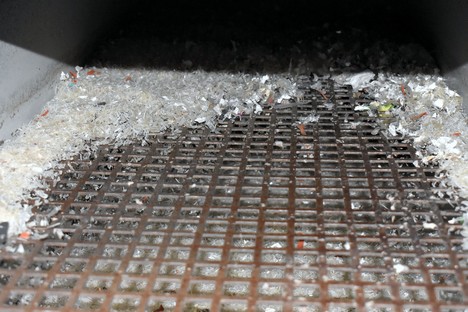 - And a second grinding produces this more refined material

Sustainable
Finally, they also have an eye for making their own business operations more sustainable. "When owners Marco and Ruud had this building built, the wish was to do this as climate-neutral as possible. For example, the building has no gas connection and no central heating. We heat by means of groundwater that we pump from 400 metres underground and that is always around 16 degrees. By means of compression we use this in the winter to heat the building and in the summer we can use it to cool."

One problem is that it's already too small, Jorg concludes. "There's still some space behind the current warehouse. In the meantime, the land has been purchased and we are in consultation with the municipality about a possible new building. The goal is then to double the storage capacity. We hope to get clarity about this this year and to work out the plans further."