The crops are still concentrated in the south central zone, where the volumes remain at the peak although the focus has moved towards the mid-season varieties, dominating Legacy and Brigitta, while the earliest varieties are already presenting a downward trend in their volumes.

According to information from iqonsulting.com, the south zone is increasing its participation, mainly the Araucanía region and although it has not reached the peak of volumes yet, it shows an increase over the previous season.

During week 52 - which was interrupted by the Christmas celebrations and low intensity rains that affected some harvest areas - 8,620 tons were exported, accumulating a total of 47,821 tons up to date (1% more than last season at the same week). Although the total volumes exported are similar to the previous year, there is a change in the configuration of varieties exported this season. 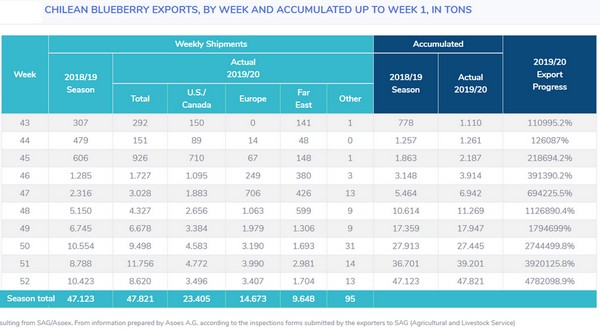 Thus, at week 52 and with a progress of 42% with respect to the initial estimate, the varieties that have been recommended not to be exported have decreased by 53% compared to the previous season and represent only 1% of the total exports.

On the other hand, varieties with restrictions on handling and harvest periods have been reduced by 15%, reaching 29% of the total exports. Finally, the export of the group of new varieties or those that have shown good post-harvest quality has increased by 17% and represent 70% of the total. This is in line with the recommendations delivered by the Chilean Blueberry Committee, to ensure quality in the destination markets.

Shipments of organic blueberries continue to increase and 5,206 tons have been exported until week 52, 11% of the total exported to date and 45% more than the previous year.