Jim Trogdon, 22-year Middle School teacher in Coventry, Ohio, is turning heads with his hands-on agricultural classroom. Installed just this year, the high-tech farm features LED lights, healthy green plants, and the sound of running water. Plants are grown hydroponically, meaning they are grown without traditional soil and instead have their roots exposed to nutrient-rich water that allows growth. The 1000 square foot lab space has 100 spots for lettuce in gutter-like channels that feed them water and nutrients. There, they grow three kinds of leafy greens: swiss chard, sorrel lettuce, and basil. Additionally, there are 48 spots for towering vining crops like tomatoes, cucumbers, sweet peppers, and peas. They are even growing some sage plants for Thanksgiving. Once the lettuce is ready, or the vining crops are ripe to be picked, the produce is sent to the cafeteria for free, healthy salads. Some students bring produce that they grew and picked home to their families for dinner. Nothing is wasted.

Incorporating the hydroponics lab into the curriculum, Jim is excited about getting students interested in science. Students spend a half hour of their day, three days a week, learning how to care for the plants. After a month of training, they can enter the lab and take care of daily tasks without detailed instruction. Next semester, Jim plans to let these students train the next batch of middle schoolers who rotate through this hands-on project.

Jim is a five-year member of the Education Advisory Council for EarthEcho International, a California based non-profit. EarthEcho’s mission is “to inspire young people worldwide to act now for a sustainable future” (earthecho.org). Two years ago, Jim accompanied the organization’s co-founder (and personal friend), Philippe Cousteau, on an EarthEcho expedition to Southern California. The goal was to explore ways to challenge the issue of water insecurity that California was facing during a severe drought. There, they visited a farm incorporating hydroponics and aquaponics (plants grown in conjunction with fish) in a low budget system. It used less water than traditional farming, and the water was able to be re-used. Jim returned to Ohio realizing he could replicate the production method at home. Along with a couple of colleagues, a small group of Coventry Middle School faculty spent personal money to rig up some PVC pipes to a tank with live goldfish, creating a low-budget aquaponics system. Jim said he aimed to “start small and dream big”, which has now resulted in administrative support and over $50k of grant funding for the project. 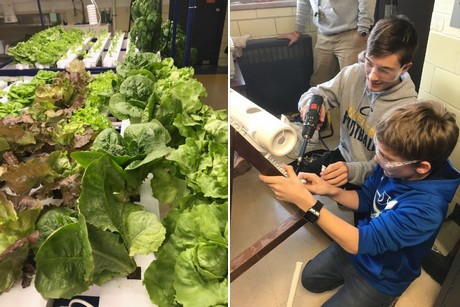 Jim did have expert help building his classroom farm beyond the PVC prototype, however. Coventry Middle School partnered with an international supplier of hydroponic equipment and materials, Cropking. Based in Lodi, Ohio, the company is about a half hour from the middle school. Every week, Cropking sends employees to Coventry to provide operations training for the hydroponic systems and troubleshoot issues. Students get firsthand experience learning about plant care, nutrition, lighting, and growth from company President, Paul Brentlinger. Jim stated that Cropking employees often marvel at what their career path may have looked like if they had the opportunity to grow food in such an intimate environment during their childhood. Jim and Paul can’t think of another example of such a program being implemented in a public school in Ohio.

Since the first seeds were sown (August 2019), around 300 heads of lettuce have been harvested. The windowsill of the classroom is lined with ripe tomatoes and picked produce, ready for use in fresh salads. Often, teachers will come in and make themselves a fresh-picked bowl of greens. Jim said he is rather non-territorial with the space, instead making it available to everyone. It is common to see teachers sitting among the plants in the mornings, warming up with their coffee. 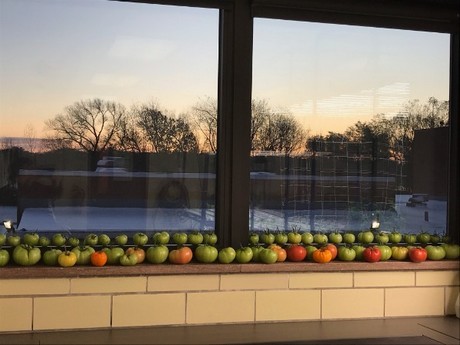 Jim shares a few reasons why he believes this kind of programming is important to get into the minds of his students. With rising food insecurity,

“…no one should be starving. No one should have an aching belly because they don’t have food…we could come up with a solution for this. There are 8 billion people on this planet, and limited agricultural space. We need to use less space to grow more healthy and sustainable food.”

One of the goals of the farm was to increase hands-on science education. Jim recalls:

“Every kid remembers the little seed wrapped up in paper towels in second grade. There was an innate sense of wonderment. Students come in and are gobbling this up – literally! They pick something off the crop and bite into it. Any time you can use all five senses when teaching science is great.”

The program has only been running three months but has received praise from many educators. Earlier this month in Columbus, the program was presented at the Ohio Middle Level Association (OMLA) conference. This annual meeting of Middle School teachers, administrators, supervisors, and more were receptive to the hydroponics program at Coventry. Several teachers have already reached out to Jim and Cropking to set up a system like this at their own schools.

Jim says that he hopes to expand the program over time. Coventry Grade School has already claimed Jim’s prototype PVC system, and plenty of Jim’s former students (now in high school) want to come back to get a tour of the indoor farm. But there is a balance to find to ensure the farm remains an effective educational tool. If it gets too big, there needs to be a full-time manager and much more time dedicated to plant upkeep. Although, there is plenty of time to figure that out in a few years. For now, Jim is happy with what he can teach in this new space. “It’s what I thought education should be and would be.” he said, “That’s really gratifying.” 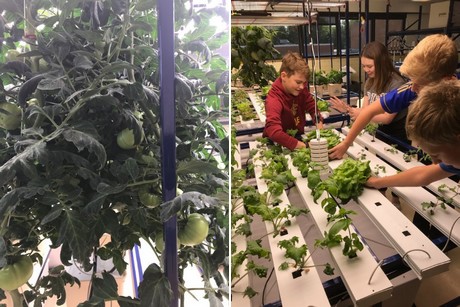 The farm is already expanding to assist in other projects, however. Currently, in one corner of his classroom, tilapia is being grown alongside what will become a native plant nursery. Using aquaponics, native plants grown here will eventually be transplanted into the bog behind the school to restore ecological diversity.

Jim is excited about the potential he sees in this program, and especially the success he has seen with his students. Outside of his day job, Jim is a proponent for sustainability, conservation, education, and responsible stewardship of our environment. In a final message toward those that want to help make a step toward creating a more sustainable world, Jim said

“This [project] is a solution to a real-world problem: growing crops without soil, any time of year, in any climate.” If everyone did something small like this, can you imagine what we could accomplish?”