Netherlands: Harvesting strawberry till the 1st of December: ‘that’s unique’

"We again look back on the previous strawberry season with pride and joy”, this can be read on the LinkedIn-page of strawberry cultivator by Broersen. The time to look back came later than usual this year. “In the first week of December, we picked our last strawberries of the year, and that is truly unique,” Sem Broersen explains. 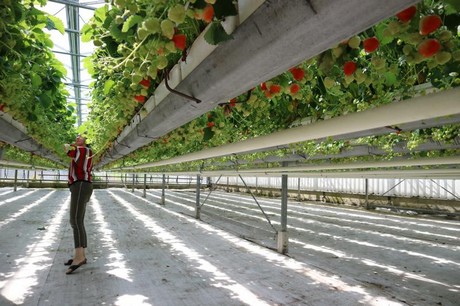 "Normally we harvest strawberries from the end of April to the end of October, in this time we only lightly heat the three thousand square meters of greenhouse during spring. This year it lasted till the 1st of December because the cultivations took longer, for which there were multiple reasons. First of all, a colder spring, followed by a typical summer despite ‘the week when it reached 40 degrees’ and finally autumn, which was very cloudy causing a lack of sunlight.”

Everything moved up without being planned, and whether this is advantageous or disadvantageous is something Sem doesn’t know yet, but the weather simply will not be controlled.

Spread production
In the Dutch town of Warmenhuizen, the greenhouse will be prepared for the season to come. This year, the first strawberries were picked on the 14th of April, and in the next season, it will also be around that time that the plants that provide fruits to be picked for about six weeks will show their beautiful red strawberries.

The plants are being placed in the greenhouse in different phases to ensure a gradual production so that there are strawberries available till spring, or in this case, late into Fall. “This type of spread out production is important to us because we have a self-picking garden and farm shop.”

Ilse and Ruud and Sem and Kay

Asparagus is also being sold in the farm shop. Sem and his brother Kay started this in 2013, and in 2017 the green asparagus was accompanied by white asparagus in the shop. “We never have a dull moment”, Sem laughingly says. “The first strawberry plants will be placed in the greenhouse at the start of January, and the asparagus will be back next spring. Until that time, there is enough maintenance work to be done, together with my parents Ilse and Ruud, who started their strawberry cultivation ten years ago.”