Could there be too many tomatoes?

From seed to retail and everything in between. That's the target group of the Global Tomato Congress, that was organised yesterday in Rotterdam, the Netherlands. The visitors and speakers paused to consider how the tomato sector can continue to grow. Focusing on diversity can ensure this, but there were also some contrasting voices to be heard.

Too many tomatoes?
For example from Stephan Weist of the German retailer REWE Group. During the day-long programme, which was perhaps a little too long, he told us that the retailer had no less than 870 (!) SKU's (stock management units) for tomatoes. According to Stephan, this makes it (unnecessarily) difficult for the consumer to choose, while ultimately the consumer buys mainly those few favourite varieties or brands. Stephan would therefore like to go back to 'only' 24 SKUs, also to avoid (logistical) headaches at the retailer.

This will not be easy, however, because breeders, among others, are constantly developing new varieties which, whether or not in cooperation with sales parties, end up on the shelves in a wide variety of packaging. For example, Syngenta's Arend Schot pointed out the 'romantic retro' trend, in which consumers want to cook with tomatoes in the same way as grandmothers did in the past. Breeding companies are responding to this with new, 'old' varieties. 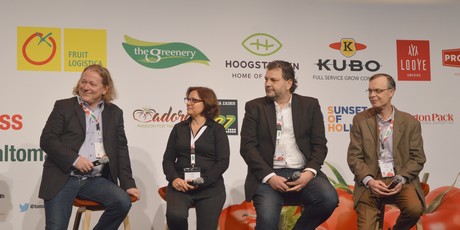 Concepts in the tomato chain
It is no longer only about varieties developed by breeding companies, but more and more about complete concepts that are developed around them and are marketed together with growers and even retailers.

However, in the end, it is not the breeding companies that are taking the lead in this development. "We can prepare a concept and a communication strategy, but we're not the executing party", was how it sounded during a panel discussion with Jörg Werner (Rijk Zwaan), Pilar Checa (Syngenta), Cees Kortekaas (Axia Vegetable Seeds) and Hans Verwegen (Enza Zaden). In the end, these concepts are executed by the retail sector.

Lighting & technique
Next to the main stage, there were also two smaller stages on which packing & cultivation strategies were discussed. For the participants and visitors, it took some time to get used to this concept but eventually it resulted in a relaxed day - although the headphones that were supplied at the main stage to hear the speakers, would have been very useful at the other stages as well.

On the smaller stages amongst other things, the control of the Tomato brown rugose fruit virus (ToBRFV) was discussed, as well as using diffuse light (Svensson) and using techniques to optimise the climate (KUBO).

Particularly interesting for the growers, who did notice that the Dutch tomato growers did not come to Rotterdam in large numbers. The Belgian colleagues, on the other hand, had a better representation. It seems adding value is not something growers are highly interested in and prefer to have this done by their sales organisations. 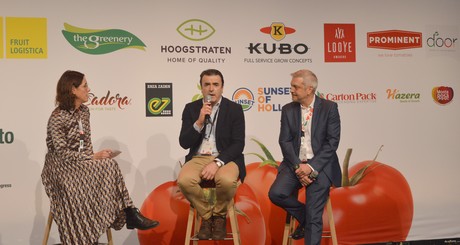 Maura Maxwell interviewed Freshtrategy's David Del Pino and CASI's Antonio Domene in a part of the programme that focused on Spain.

Year round cultivation
During the day also Piet Hein van Baar of Signify, Theo Tekstra and Leo Lansbergen of Fluence by Osram and Peter Klapwijk of 2Harvest talked about the latest developments in the lighting of tomatoes.

By adding grow lights, North-Western Europe is becoming increasingly capable of growing and marketing tomatoes all year round. This could hurt Spain and Maroc, for example - although exports from the last one only rise. And also there developments are going on. The Spanish 'crisis' is forcing growers and sales organisations to work together, and in difficult times there is more willingness to do so, according to David Del Pino of Freshtrategy and Antonio Domene of CASI.