up to 20,000 Spanish growers protesting

"The sector is suffering from a structural crisis"

Spanish growers are not in their greenhouses today, but are out on the streets. They're raising their voices to get attention for the profitability of their enterprises and their position in the fresh produce chain. "The sector is suffering from a structural crisis. Our industry is at risk of going extinct", the protesters claim.

"It's a unique situation", said Joaquin Lopez, the president of the Union of Independent Farmers, this morning, right before the protest started. "For the first time all growers are united. It has taken us 30 years to achieve that also the traders join the movement," says Bernabé.

No harvesting, no sales
All cooperatives in the province of Almería are closed today and no fruits or vegetables are being sold. In the greenhouses the growers are not working today. The protest was initiated by the Union of Independent Agricultural Producers and was rapidly joined by other organisations: ASAJA, COAG, UPA, ECOHAL & Coexphal.

This morning buses from various agricultural regions (El Ejido, Vícar, La Mojonera, Adra, Roquetas de Mar, Níjar, etc.) with growers and suppliers headed to the Port of Almeria. It was predicted and now is estimated that up to 20,000 people joined in the protest.

"We will be demonstrating in Almeria until two or three o'clock in the afternoon", Bernabé said this morning. "Then we will visit the private warehouses that are not going to close with the excuse of losing money. Tomorrow morning there will be no sales or movements of products either."

Bad position of growers
The protesters believe that the public administrations have abandoned the Spanish agro-food sector, especially the fruit and vegetable sector, a leading exporter to the European market. Structural measures are requested, and they regret that the European Union has handed its internal market over to the large distribution chains, preventing the fruit and vegetable sector from being competitive and constantly using it as a bargaining chip in the agreements with third countries. "Agriculture is being dismantled by EU policies”, Andrés Góngora told us last week.

Uniting field
By uniting the growers, they want to change this. "The field is uniting. The growers are aware that they end up paying for the product and now they want to say 'Enough!'", Bernabé adds.

At the last meeting, the UAI had 4500 members. The power of social networks has allowed them to expand rapidly and today new petitions have arrived reaching a total of 6500 farmers.

"There is only one solution", Bernabé calls out to growers. "JOIN. If growers unite, they become strong and no one will be able to bully them. The European Union and the large supermarkets eat the small farmer while passing the ball: the organisations pass the problem on to the marketers, the marketers send it to the European Union, and then the institutions leave it in the hands of the large supermarkets", concludes Bernabé.

"The problem goes beyond one grower: we have to analyse and control the treaties with third countries, the workforce and, above all, give preference to the national product. It makes no sense to talk about overproduction when we are importing products", he concludes. "Only growers are the owner of the product and therefore also of the problem. We should no longer sell at shameful prices." 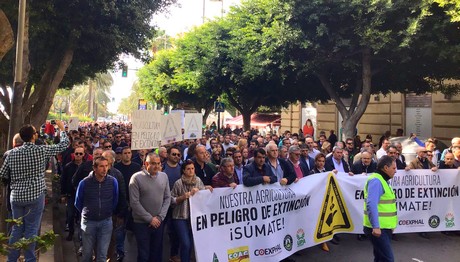 Objectives
1. Raising the awareness of all administrations about the crisis in the fruit and vegetable sector.

2. Putting an end to unfair competition from third countries.

3. Setting up a specific crisis management fund for the entire fruit and vegetable sector. This new measure falls outside the operational programs of the Fruit and Vegetable PO's and is within reach to all producers.