US: DC grows less than 0.5% of the produce it consumes

With the DC Urban Agriculture Land Lease Program, Washington DC shows its renewed interest in urban agriculture. Anacostica Aquaponics, in a statement to the DC government, argues in an effort to refocus the attention of the project on what truly matters. "We need to measure what we’re currently growing and set a goal for how much we want to grow."

In some rough calculations based on numbers from the USDA, Anacostica shows that the current production in DC has a lot of ground to cover. The USDA states that the average American eats about 270 pounds of fresh fruit and vegetables each year, and with 700,000 people living in DC that amounts to about 189 million pounds of fresh fruit and vegetables. 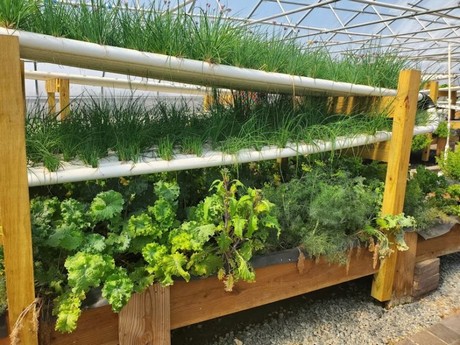 Anacostica in their fairly lenient calculations of the fruit and vegetable production in DC, questioned whether the number even reached 1 million pounds. "This means we are currently growing less than 0.5% of our own food."

So the production goal will be many times larger than the current capacity, which leaves one question: how to scale up? Anacostica Aquaponics believes there is a need to focus on controlled environment agriculture and "new growing technologies like hydroponics, aeroponics, aquaponics, and vertical growing."

How much per year per square foot?
Washington DC is a confined urban space, with cold winters and hot summers. According to Anacostica Aquaponics, farms that will make a real difference to the DC food supply will be those that can grow the most per square area, and that can grow through as much of the year as possible. Which points to controlled-environment agriculture.

Anacostica Aquaponics presents some stats about indoor production and its potential:

"These are the type of numbers that begin to make a real difference in growing our own food."

In conclusion
In this dense urban environment with limited available space Anacostica Aquaponics sees opportunity for urban indoor agriculture to help produce the necessary food inside of the city of Washington DC. They think that one of the most important factors to look at is the amount of food that can be produced with any particular method of cultivation per square foot per year.

Anacostica Aquaponics see aquaponics as a natural fit for this, producing both healthy greens and also local protein for a healthy local diet for DC citizens.