The 'strawberry picking robot' can work all day and could soon replace the seasonal workers. According to Norwegian grower Simen Myhrene, this is the future: “It does not take a lunch break or anything. It is, of course, interesting to reduce wage costs."

Myhrene demonstrated the robot at the Environmental and Life Sciences University of Norway: “For the horticultural industry, this is a revolution that can be compared to the arrival of the milking robot in the barn. The growth in the market is being taken over by imported strawberries, so now we have to prove that Norwegian strawberries can compete in the market." 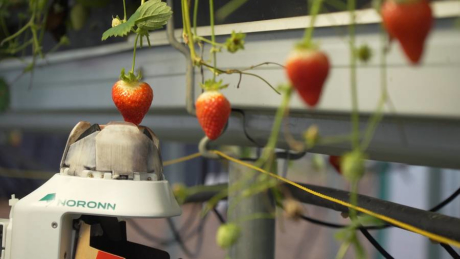 Interest from all over the world
Noronn has started to put the robot on the market. Katharina R. Asting, managing director at Noronn: “There is a great interest in the robot from all over the world. We have had visits from strawberry growers from many different countries. They all come to see this (in our opinion) progressive solution. After all, it is artificial intelligence, because it picks what we want it to pick."

The robot has been developed to pick strawberries which grows on racks. A method that is almost used by all growers in Europe already. This includes 25 strawberry growers in Norway.

Shortage of seasonal workers
Asting: “It is a challenge to get enough pickers. In some countries, part of the harvest lingers because there are not enough pickers. We see more and more growers growing on racks, the season lasts longer and the cultivation can be better managed.”

Strawberry grower, Simen Myhrene believes that more growers will switch from field cultivation to cultivation on racks in plastic tunnels, so that the picking robots can take over the picking.

Robots are the future
Next summer will be the last time that Myhrene will grow strawberries in fields, after which he will use the Noronn picking robot.

Myhrene: "About 30 percent of the costs in strawberry cultivation is associated with harvesting. I am sure that it can greatly be reduced, thanks to automation."

The Environmental and Life Sciences University in Ås, under Oslo, has received almost 5 million Norwegian kroner (about 495,000 euros) from the Research Council, using which the robot can be commercialised.

Asting: "We are working on delivering the robots on large scale."