The structure, named the Natural Light Growing (NLG) Centre, has been designed and built by RIPE Building Services, partnered by CHAP with £500,000 funding from Innovate UK. It was officially opened by Professor Janet Bainbridge OBE. 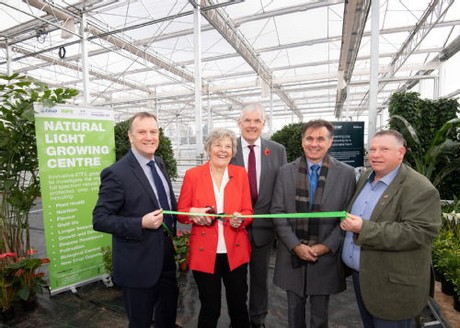 The NLG Centre is the first of its kind and will act as a demonstration facility and experimental hub for horticulture to investigate the effect of full spectrum growing conditions on crops in a protected environment. The facility will host projects looking in detail at yield and speed of growth as well as traits like taste, health and vigour.

Rather than being constructed from glass, the NLG Centre uses a new type of ETFE film, which transmits the full spectrum of UV light. The film is inserted into the light-weight frame design and tensioned using patented heat technology. The construction also uses a unique ground anchoring system that allows the structure to be built quickly and efficiently, without the need for traditional concrete foundations, in all weather conditions.

Over the next few months, CHAP will be launching early trials in the facility and holding a number of open-days to invite businesses to explore ideas for projects. As well as the unique light transmission qualities of the facility, the structure is also tall enough to accommodate vertical farming and has been designed with novel automation projects in mind.

Fraser Black, CEO of CHAP, said: “The NLG Centre at Wellesbourne Campus is another vital open-access facility for UK agriculture. We look forward to welcoming British growers to explore some of their key productivity challenges.”

Phillip Lee, Managing Director of RIPE Building Services, said: “We’re incredibly excited to be partnering with CHAP and officially launching our new prototype greenhouse at Warwick’s Wellesbourne Campus. The location is ideal for the facility, being part of Warwick’s innovation community as well as a major growing area in horticulture.”

Simon Swain, Vice-President for Regional and National Engagement at the University of Warwick, said: “The opening of the NLG Centre marks another exciting step in developing our Wellesbourne Campus as a centre for innovation, attracting novel thinkers, companies and partnerships onto the campus to work alongside our own world-renowned crop scientists and automation engineers.”