USDA Red, the world's first true red spinach variety has been developed and released by the Agricultural Research Service. 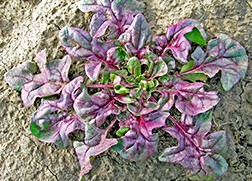 Spinach has always been known as a green leafy vegetable. There are leafy vegetables often called red spinach. But these are actually red-leaf amaranths (Amaranthus spp.) or other plants such as Red Goosefoot (Blitum rubrum), not true spinach (Spinacia oleracea). There are currently some true ''red'' spinaches on the market, but the red color is limited to the veins of the leaves. The red-veined spinach variety Bordeaux is a parent of USDA Red.

Spinach consumption (and production) in the United States dropped from 2.3 pounds per person to 1.6 pounds in 2006 following an Escherichia coli outbreak in 2006, and it has never fully recovered.

"A true red spinach like USDA Red will bring excitement to the spinach market and could help attract people back to eating spinach. It can be used as baby or ''teen'' leaf in salad bags, as bunched products, and in spring mixes for fresh-market consumption. The red color in spring mixes is currently provided by red lettuce, radicchio or chard. Red spinach will give processors another choice," said ARS research geneticist Beiquan Mou, who developed the new variety. Mou is with the Crop Improvement and Protection Research Unit in Salinas, California. USDA Red spinach also works frozen or canned.

Spinach is one of the most desirable leafy vegetables with high levels of beta-carotene (provitamin A), lutein, folate, vitamin C, calcium, iron, phosphorus, and potassium.

The red color of USDA Red comes from the phytonutrient betacyanin rather than the more common anthocyanin. Betacyanin is a potent antioxidant that has been shown to significantly reduce oxidative stress in patients and may even help in preventing chronic pathologies, inflammation, and cancer, according to the scientific literature.

The antioxidant capacity of USDA Red was 42–53 percent higher than other spinach cultivars in five tests conducted over three years.
'Betacyanin adds another benefit to a plant already loaded with phytonutrients, making spinach a true ''super food,"' Mou added.

USDA Red is a semi-flat type of spinach with a medium growth rate and semi-erect leaves. Its leaves are spade-shaped with round-pointed tips and purple-red veins and petioles. Compared with other spinach varieties, it has moderate resistance to bolting.

ARS has applied for a Plant Variety Protection certificate for USDA Red and the agency is seeking a partner to license production of seeds for the market.

"Ultimately, consumers will benefit from having access to new vegetable products that are exciting and good for them," Mou said. This new variety is the result of traditional breeding.