“No matter what fog system you use, a good controller is essential”

Fog systems
Fog systems give growers more control over their growing environments – they allow growers to regulate humidity and temperature through the dispersion of small droplets of water. “Basically what our products do is create billions of 10 micron droplets of water,” says Mark. “By creating these small droplets we increase the surface area to volume ratio without making the droplets too susceptible to movement, because as you reduce the droplet’s size you also reduce its mass. Water only evaporates from the surface, so by increasing the surface area to volume ratio you increase evaporation from the surface. As the liquid flash evaporates, the process of it turning from a liquid into a gas cools the air around it significantly. At the same time the system is adding about 1.3 US gallons / 5.00 liters per hour per nozzle to the air around it, which increases the humidity in the air.” 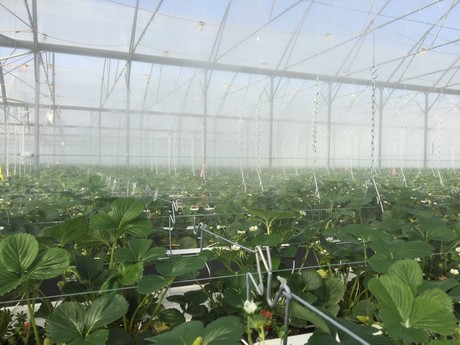 When a grower uses a fog system, temperature and humidity must be controlled in relation to each other. They are always relative to each other so you can’t change one without it affecting the other. “These things are happening at the same time,” Mark says. “If you use a fog system to humidify, there will be a change in air temperature as well; if you use it to cool, there will still be a change in humidity – the two work hand in hand. But as you get further up the scale, where you are adding more and more, there comes a point where the water cannot flash evaporate as efficiently. And if it doesn’t flash evaporate as fast, that’s when you get wetting, rain, saturation and everything else. So the cooling part of our system is controlled not only by temperature, but also by humidity.”

Environmental control
This is why control is such an important element of a fog system. “The climate computer or controller is monitoring the temperature, humidity, outside air, inside air, many different things you name it, at all times,” he says. “It’s collecting all this information in the computer and letting it spit out data that will help control the fog system. This system has to be run in conjunction with everything else in the greenhouse, but we at MicroCool are not controls people. So, we work closely with the control people, to have our MicroCool system and their controls to work together for the benefit of the grower. This allows the controller to use its skill to release the fog within the parameters that we’ve set.”

Mark continues: “No matter whose fog system you use, without good control it’s useless. You need a system that looks at the balance of the humidity and temperature. The air that comes into the greenhouse is changing day by day, second by second. This requires constant monitoring and consistent control.” 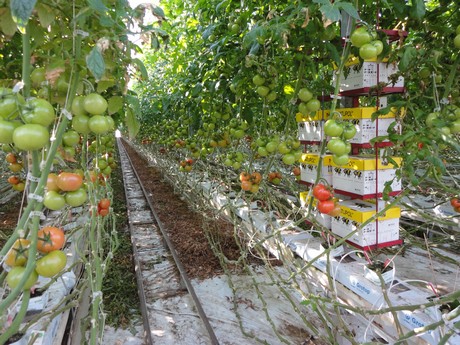 Rotating nozzle
Allowing growers more control with these systems give them the tools to make the fog work for their growing operation. This is why MicroCool’s Ibex systems allow for more control than typically available in these systems. “The unique thing about the Ibex systems – the stainless steel lines that you see most often when it comes to fogging – is that with most stainless steel systems, once you put the nozzle on the line you can’t rotate the nozzle,” says Mark. “Our ROC system allows you to turn the nozzle on the line, while it is in operation through 360°. This allows you to position the direction of the nozzle wherever you want.”

Cannabis
Microcool’s systems are also used within the cannabis industry. “We’re doing a lot of these for the bigger cannabis cooperative greenhouses,” says Mark. “We’re also working with indoor growers on this application. With indoor growers, it’s humidification specifically. We can’t cool indoors, because you have to change the air for the cooling. Indoor growers use exclusively what we call our ‘Focus’ systems. The ‘Focus’ system is a set of nozzles that can be mounted independently. This is quite different from the conventional fog system, but the same parameters apply. The Focus system is a recirculating system, basically every nozzle has a solenoid, so there’s no dripping. It’s a similar system to those used in industrial humidification.”

Fog is not mist
Mark points out that there is a distinction between fog and mist, a distinction that is extremely important in relation to horticulture. “The Dutch word for fog and mist is the same word, ‘nevel’, but the problem is that they are two very different things,” he says. “Misting is a system that creates droplet sizes of 100 to 200 microns, and is used for watering. The fog system does not water plants, all it does is create a humid environment around the plant leaves (like a lace glove) to control its transpiration. In horticulture this distinction is very important, we don’t supply misting systems, we supply fog systems.”