For vegetable growers in eastern Victoria, NSW and Queensland it is time to review their water availability for summer crops. A drier than average spring is forecast for most regions as shown in red below, especially for Eastern Victoria to Queensland. This compounds the dry year to date with some vegetable growing regions receiving less than half of their usual rainfall.

This means little relief is in sight for those currently experiencing rainfall deficiencies after a dry start to the year for large parts of Australia. 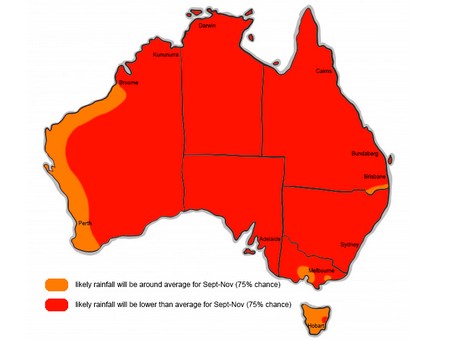 The forecast is better for Tasmania, the southwest of WA, and southern Victoria (Ballarat, Greater Melbourne, Bairnsdale). In those regions the average total rainfall in the next 3 months is forecast. Stanthorpe in Queensland will hopefully see some rain with average rainfall forecast for Spring.