While Florida and California accounted for 76 percent of U.S. production of field-grown tomatoes in 2016, greenhouse production and use of other protected-culture technologies help extend the growing season and make production feasible in a wider variety of geographic locations.

Some greenhouse production is clustered in traditional field-grown-tomato-producing States like California. However, high concentrations of greenhouses are also located in Nebraska, Minnesota, New York, and other States that are not traditional market leaders. 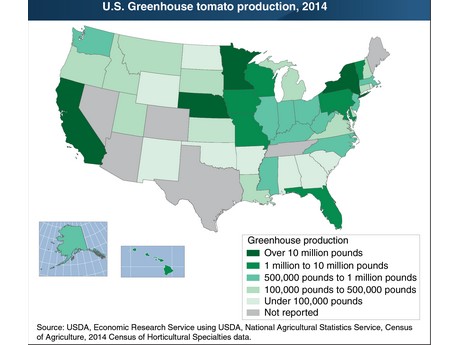 This chart appears in the ERS report “Unpacking the Growth in Per Capita Availability of Fresh Market Tomatoes,” released in March 2019. This Chart of Note was originally published March 8, 2019.