Retailers bring herb and vegetable production closer to the public

Can supermarkets contribute to local cultivation?

The world’s current food system is under pressure. Global population numbers keep rising significantly, and a large portion of these people already live in, and will increasingly live in cities. So, ever further away from where food is grown. At the same time, it is expected that the amount of available agricultural land will decrease, due to climate change and urbanization. Is vertical farming – multi-layered cultivation, with no sunlight, in urban areas - for example, in or close to a supermarket a possible solution? 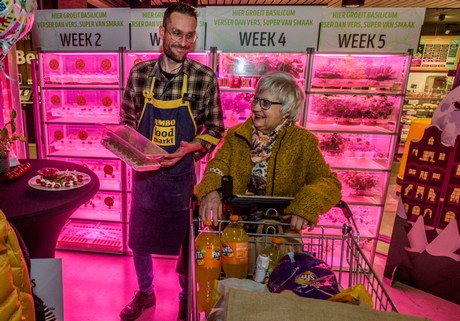 Jumbo cultivates herbs in its Foodmarkt in Veghel, the Netherlands

A knowledge café about multi-layered cultivation was recently held. Here, AgriFoodTech Platform – a partnership of, among others, the Dutch Food Industry Federation and the Dutch Agricultural and Horticultural Organization - established that this type of cultivation offers opportunities to gain additional knowledge and innovating specific foods production in certain geographic contexts. This method is not, however, considered to be the one and only solution. “There is still a long way to go before it can be broadly implemented,” reports AgriFoodTech Platform on its website.

Wageningen University & Research (WUR) is also doing research on this subject and they too, see opportunities. “By growing crops in layers in a controlled environment, guarantees can be given about quantities, as well the quality, of these crops. This can happen every day of the year, regardless of the weather or climate changes.” WUR thinks vertical farming can bring about a revolution in the production of fresh vegetables. 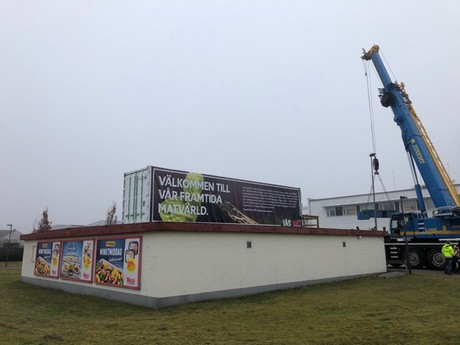 Freight Farms’ cultivation system in a container that the Swedish supermarket, ICA, uses to cultivate vegetables on site

Savings
There are huge benefits to this, Infarm states on their website. Infarm is a German company that supplies ‘instore farms’ (modular ecosystems). These are placed in supermarkets, restaurants, and distribution centers. For example, in a 2m² mini-greenhouse in a supermarket, the same amount of vegetables can be grown as would be produced on a 400m² plot of agricultural land. In addition, no pesticides are used, 75% less fertilizer is needed, and a 95% reduction in water can be realized. The distance to the consumers is especially important to Infarm. “We believe our current food system’s biggest failure is that is is too far removed from the people it is trying to feed.”

InFarm recently installed a mini-greenhouse in two Edeka supermarkets in Münster, Germany. The regional aspect is important for Edeka. “It is just about impossible to get more local than this,” says Uwe Marx, Branch Manager in Münster’s Loddenheide suburb. 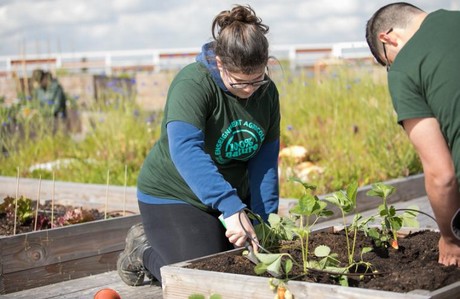 Food Miles
Food grown in or near the supermarket is, of course, also fresh. This aspect is one of the reasons, ICA  – a supermarket chain in Sweden - joined forces with Freight Farms in Högskolan to grow vegetables such as butter lettuce, spinach, and herbs in a container on the supermarket’s grounds. Freight Farms – which is based in the United States - says this system offers enough room to eventually cultivate as many vegetables as would normally grow on 8.093m² of agricultural land.

The distance from ‘farm’ to the store has also been shortened to a mere 30m. ICA emphasizes the benefits of local cultivation in a press release. “Freight Farms’ technology is especially useful here in Sweden, where the short cultivation season limits the availability of products, and we are becoming more and more dependent on imported fruits and vegetables,” writes an ICA spokesperson. 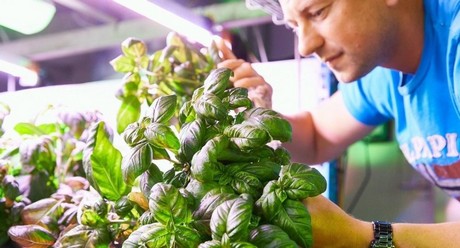 High cost
On the other hand, multi-layered cultivation is expensive. WUR admits that, at present, it is also still not energy efficient at all. However, researchers are hard at work trying to grow products in a greenhouse, using less power. “You need much less water and CO2 than in a traditional greenhouse. This is, however, not the case when it comes to the power needed to cool and humidify the interior climate. The high internal heat shedding and the lack of natural ventilation ensure a great need for cooling and, therefore, a lot of residual heat is produced.” Not all crops are suited to vertical farming either. AgriFoodTech Platform says leafy vegetables and herbs do well inside, but that it is more difficult to cultivate plants such as wheat and potatoes in a vertical farm.

Local and overseas supermarkets are fully invested in this subject and are developing activities to grow their own herbs and vegetables on site. Most retailers indicate that freshness and reducing products’ environmental impact are crucial aspects for wanting to start cultivating their own herbs and leafy vegetables. However, customer experience plays a role too. For example, the Dutch supermarket chain, Jumbo, says on its website that it has started growing basil in its Foodmarkt in Veghel to, among other things, improve customers’ food experience.

An increasing number of retailers are beginning to grow their own vegetables. Here are some examples: