Throughout 2017 the Upper Gxulu community in Keiskammahoek, Eastern Cape, worked without pay to keep their blueberry project alive. Ten hectares of blueberries had been established under shade netting, but without the necessary operating capital, the project’s future was in jeopardy. 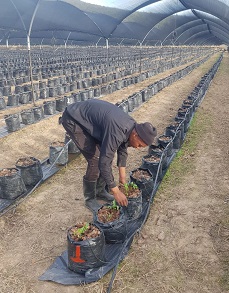 Their efforts to minimise losses on their blueberry plants meant that by the time the Humansdorpse Koöperasie (also known as The Co-op) came on board, just under half of the plants had been saved and the shade netting, an expensive asset, was in good condition.

The community was recommended by the Eastern Cape Department of Rural Development and Agrarian Reform to the business development division of Humansdorpse Koöperasie, resulting in the Kibiti Farm joint venture between them, the Zanokhanyo Primary Co-op representing the community and Geju Holdings. The provincial government financed the installation of the project’s irrigation.

“We could rescue 4.7ha of the blueberries and we grow snack peppers under contract on the remaining 6ha,” says Deon Heyns, business development division manager at The Co-op. Unfortunately, the low level of their dam has meant a postponement of a further 6ha of snack peppers.

Certified packhouse needed to start exports
”In the first year we harvested just 1.5 tonnes of blueberries a hectare, in the second year 4 tonnes a hectare and this year we’re hoping for 6 tonnes a hectare. These are old cultivars but we have our eye on some of the newer, higher-yielding cultivars, especially once we get to the point of exporting.”

At the moment their marketing plans for the blueberries are limited by the absence of a Global GAP-certified packstore, which would allow them to export. They’re in talks with the provincial government to explore that possibility, in which case the full ten hectares will probably go back to blueberries. 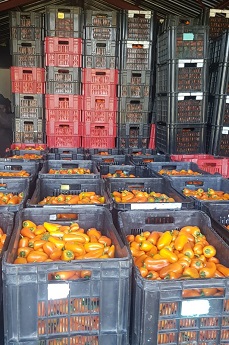 For the moment Kibiti Farm blueberries go to King Williams Town, East London, Port Elizabeth and in bulk to Johannesburg, earning the community – together with the snack peppers as well as land rental – around R1.3 million (78,700 euros) last year, with further profit-sharing possibilities in future.

The Humansdorpse Koöperasie’s business development division has been in operation for five years, actively seeking partners for projects, along various models, but all with black economic empowerment as priority.

It currently has nine projects running, another seven in planning phase, projects that demonstrate the agricultural diversity of the Eastern Cape: citrus in the Gamtoos, apples and pears in the Langkloof, pineapples near Bathurst, maize (corn) in the Transkei, chicory and oats.

“Black farmers are our members of the future”
The Humansdorpse Koöperasie is an old-school agricultural cooperative of 1,600 members, providing inputs, financing and technical services to the agricultural community of the Eastern Cape since 1944.

“The nice thing of this story is the commitment of the community,” Deon says, noting that it is their mandate to assist black farmers and farming projects in becoming commercially successful. “Over the next fifteen years we aim to help establish as many black farmers as possible in the Eastern Cape. They are our members of the future.” 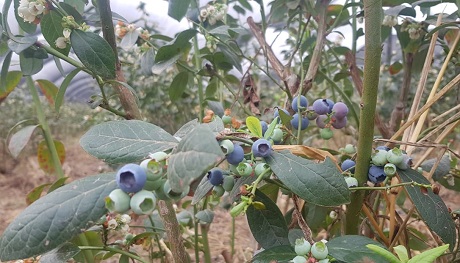 He recounts how, as strategic partner, they managed to get the Gamtoos citrus farm Entabeni out of the red within one year (although he admits that he had sleepless nights last year when the Kouga Dam was 6% full). In the Langkloof they came in to rescue two topfruit farms that had nearly gone under after hail during two consecutive seasons as well as drought.

Most of the Humansdorpse Koöperasie’s 74 ongoing projects in the Eastern Cape are undertaken as partnerships.

“Importantly, our standard procedure is that when a project is standing strong on its own feet, we pull out. Our model is a bottom-up approach in which we ask the community what it is that they want to do with the land, and we help them make it happen.”