Looye Kwekers received the ambassador of Spain on their location in Burgerveen. The delegations consisting of María Jesús Alonso and Eulalia Ortiz was received by Jos Looije (Looye Kwekers) and Juan José Lopez Lopez (Looije Aguilas). Sjaak van der Tak, chairman of greenhouse horticulture, was also present at this visit. 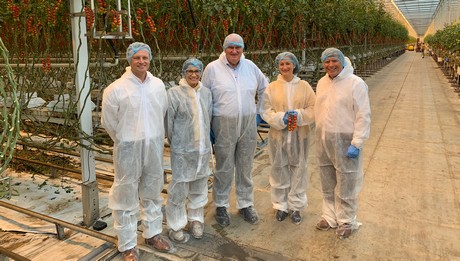 Looye Kwekers is a Dutch family company, founded in 1946 by J.M Looije, which specialized in growing tomatoes in the seventies of previous century. In 1998, the company took a step back to set up their own production facility in Águilas, with the goal of being able to supply good quality cherry tomatoes out of own production year round. The two companies are now operating independently.

The connections between the companies in the Netherlands and Spain were the reason for the ambassador to meet the organisation and the sector. There was a lot of attention for the background of the organisations and the economical interests and the cooperation between the two countries. Of course, the visit to the nursery was made.