In the Netherlands, day trading prices for bell peppers have been very good recently. This is due to the bad overflow of settings during the warm weather. "Red bell peppers were being sold for €10-13 per box. The yellow ones were even going for €16-18 per box," says Philip van Geest of Van Geest International.

"The price for the orange variety also tagged along. These high prices were, in part, due to demand from the United States. It was only the green bell peppers that were being left behind. They were at a price level of €4-5,50 per box. Production increased last week and prices have roughly been halved. These prices are now at a more normal summer level." 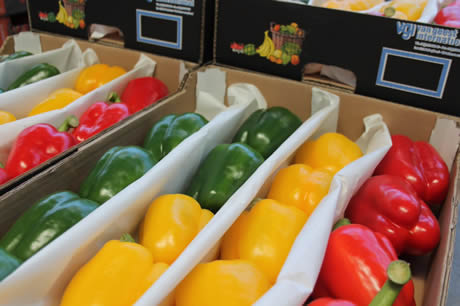 "There are a lot of Polish bell peppers on the market now. Just like Spain, Poland exports its bell peppers instead of selling them domestically. They do this because of the high prices," the exporter continues.

"Aubergines are also selling quite well. Prices, however, took a bit of a dip to €3-4 per box recently. Production will be lower this week, so there is still hope for an upswing in prices. Cucumbers are at a friendlier level again, after a long stable period. Their prices have dropped from between €5,50 and €6 per box to €3-4. This is a more realistic view than in previous weeks."

"TOVs are moving reasonably well too. Production is not huge and the prospects for this are not positive. Prices rose slightly last week from €3,25 to €4,50 per box. Loose tomato prices climbed this week. They are fairly well-priced for this time of year. Production is very low."

"Obligations and a broad demand are making for excellent prices for growers. These prices have increased from €4 to €5,5 or €6 per box. Tomatoes are also expensive in Poland. This is so the market does not get depressed. There are massive problems with cherry tomato because of the supplies from Spain and Morocco. Prices are then also at a low level. They are going for €3-4 for a 9x250g box," concludes Philip.