KUBO has developed a new system of night cooling for use in Ultra-Clima greenhouses. The innovative principle can reduce greenhouse temperatures in climates with high night-time temperatures to the desired level. This enables both increases in productivity and quality and year-round growing. KUBO is expecting the system to result in a breakthrough for tropical and subtropical regions of the world, where horticulture is not yet possible.

Night-time temperatures do not cool down sufficiently in many agricultural countries in the world. Examples include the east coast and south of the US, the Chinese west coast, Japan and South Korea. In these places, the temperature and relative humidity remain high at night. High average daytime temperatures result in reduced productivity and quality. This also results in problems with year-round growing, a need that is particularly high in regions where ‘local for local’ growing takes place.

The existing pad and fan system, commonly used to cool greenhouses, is not sufficient when relative humidity is too high. That is why KUBO has been searching for a new type of night cooling. 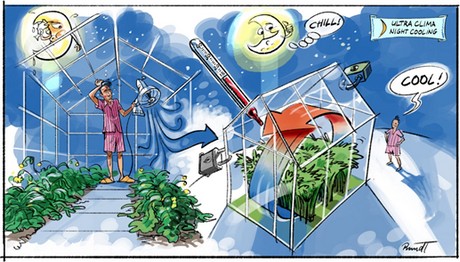 Acceptable night-time temperature
KUBO uses water/air heat exchangers for the cooling, which are integrated in the Ultra-Clima greenhouse air treatment units. The screen systems are closed after sunset and the air temperature in the greenhouse reduces gradually through the recirculation of the cooled greenhouse air. This enables growers to reduce night-time greenhouse temperatures to an acceptable level. ‘Despite the severe conditions outside, the crop remains in balance in the greenhouse and the grower retains optimal productivity and quality,’ stated Wouter Kuiper, KUBO CEO. An additional advantage is that the system is not only suitable as night cooling, but can also be operated during the day. Provided, of course, that this is economically feasible.

Effects in practice
The first two systems are already in use in Ultra-Clima greenhouses in Japan and South Korea. The concept will also be installed this year in greenhouses that are currently being constructed: one in Japan, two in South Korea and five in China. Ton Fransen from the similarly named advice agency that is supporting growers in Ultra-Clima greenhouses on behalf of KUBO has seen the significant effects of the system in practice. ‘In Japan, Kunieda is the only rose nursery that uses this night cooling. This enables the company to supply roses of sufficient length and bud height throughout the year. At a location such as this, the system provides the ideal climate.’

Growing in tropical areas
The system can be used for all horticultural crops, including vegetables, fruit and ornamentals. Wouter: ‘We also expect to be able to access new markets where crop growing was fully or virtually impossible until today, such as equatorial subtropical and tropical climates.’