The Russian Minister of Agriculture Dmitry Patrushev paid a working visit to the Bryansk region. He discussed the development of the agro-industrial complex with the head of the region, Alexander Bogomaz, and opened a new greenhouse complex Zhurinichi.

The agricultural sector is one of the key drivers of the regional economy, its share in the regional gross product is almost 20%, and the volume of agricultural production last year grew by more than 3%. The main export positions are cereals, meat and milk, as well as finished food products.

Dmitry Patrushev highly appraised the fast pace of the harvesting campaign and the success of the Bryansk farmers in the development of agricultural exports. “The Bryansk region faces a serious task to increase exports 11 times to 1.1 billion dollars. We have already spotted an increase in export performance. By mid-August this year the increase was 58% compared to the same period last year”, the Minister said during the meeting with the head of the region. 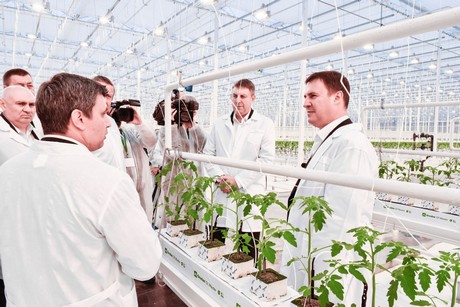 The steady growth of economic indicators resulting from the annual increase of government support contributes a lot to the comfort and well-being of rural workers. This year the volume of state support to agrarians of the Bryansk region amounted to 10 billion rubles, 60% of this amount has already been brought to the final recipients, Mr Patrushev stressed.

Opening the Zhurinichi greenhouse complex, the Minister noted that the construction of such high-tech facilities demonstrates a new stage in the development of domestic agribusiness. The complex meets most modern requirements for the environmental friendliness of growing agricultural products, uses innovative technologies and equipment. The launch of a greenhouse with a capacity of almost 5 thousand tons of vegetables per year will allow the region to have an immediate 74% production spike to 11.5 thousand tons. The Minister noted that such a significant breakthrough would not have been possible without state support.

Since 2014, efficient state support measures helped to build and upgrade more than one thousand hectares of winter greenhouses in Russia. Total production of fresh vegetables in protected ground has increased by 65% and exceeded 1 million tons.

Source: Ministry of Agriculture of the Russian Federation