"A greenhouse is just one piece of the puzzle"

The Australian company Pirrone Brothers Produce was originally only a sugar cane farm before it started growing vegetables. Initially outdoors then using a variety of protective measures, such as greenhouses. The North Queensland growing company is benefiting following the transition into protected cropping, because it has allowed the business to start supplying year-round in some adverse weather conditions. Currently, the Pirrones have a 2000-square metre greenhouse growing Lebanese cucumbers in a trial at their Ayr farm — they have secured customers and are having success. 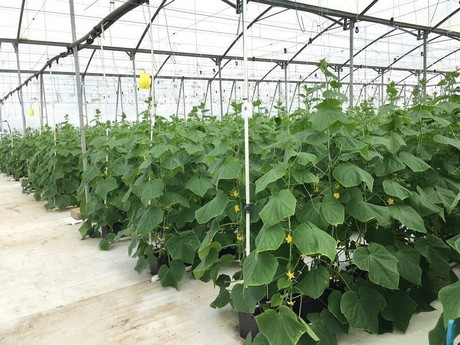 Rain and heat
"In field production, when you move into the summer months the cyclones, the rain and the heat make it extremely difficult, if not impossible, to keep growing," Josh Pirrone told the PCA Conference 2019. "In the protected structures, shading from roofs and cooling from the misting systems and other ways of adjusting to and reducing humidity enable crops to be grown through the summer months. This keeps our customers happy from the consistent year-round supply. We are not the first to grow in protected structures in North Queensland, a number of people have done it over the past 15-20 years, however with today's customer standards increasing and the recent introduction of retractable greenhouses, we feel it's the right time to succeed and bring jobs to North Queensland."

Growing orders
Following the company's expansion into vegetables Mr Pirrone says the family were surprised how much return one acre could produce, and in just two years the business was supplying cucumbers into fast food chains, with orders growing each year. But it quickly became apparent how much the region's unpredictable weather affected yields, and the ability to meet contracted orders.

"It was frustrating to us, but it was something that we just thought we had to deal with, as all around us, that's the best growers were doing," Mr Pirrone said. "We then found out Elio (Jovicich) and Heidi (Wittl) from DAFF were growing hydroponic cucumbers, capsicum and melons in a town near us. They took us to have a look at it, and with the support of those two, it became a 'no-brainer' that we should build a greenhouse and just give it a go." 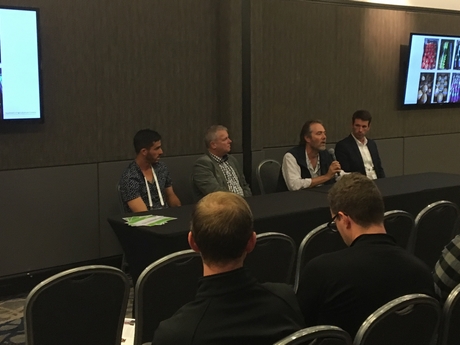 Photo: Josh Pirrone (far left) as part of a discussion panel at the Protected Cropping Australia Conference 2019 on the Gold Coast

Pumpkin prices
Mr Pirrone says the business made the money to make the investment from good pumpkin prices from their outdoor crops, and purchased a half an acre greenhouse, which the family constructed themselves, and began growing cucumbers, capsicums and tomatoes. At the same time, Josh's brother Ross underwent the Nuffield Scholarship and spent six months travelling the world and researching protected cropping in tropical areas.

"In the first two crops in the greenhouse, it became apparent from the feedback that we were receiving that we were able to meet the consumer's and supermarket's ever-increasing demand for supply and top-quality produce, which reassured us we were on the right track," Mr Pirrone said. "If you asked me the main points that we have learnt, I would summarise it down to one term: be proactive. This is in regard to hygiene, cleanliness, defence, suppression of pests and diseases. It really drums into you after a few mistakes." 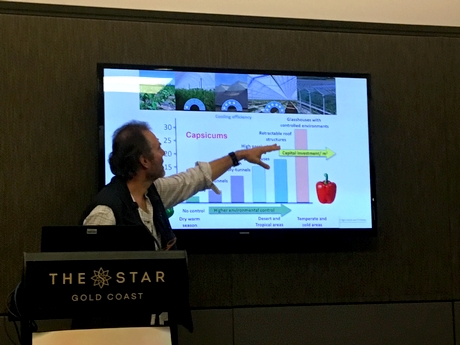 Photo: Elio Jovicich delivering a presentation at the PCA Conference 2019

Smart-scale or large-scale
Elio Jovicich is from the Queensland Department of Agriculture and Fisheries (DAF)  and is helping growers, like Josh, with the link between making the right capital investment in protected cropping and the knowledge needed to make it work. His advice is to start small-scale and expand, adding that many people think putting up a greenhouse will provide a 'miracle'.

"That is just one piece of the puzzle," he said. "There is the whole production system and the marketing that you have to consider. You need to consider, what is the risk of failure? Who is going to help me with the knowledge and high cost and high cost initially? It requires changes in the farming system. People have to learn that it is not about tonnes per hectare, but returns per square metre. A lot of people who are starting wonder why other people are doing it this way or that way, but after the struggle learn that it is not a 'copy and paste' from other farms. Everyone will use a different strategy. For example, those who are used to growing capsicums outside are not use to seeing a 2.5-metre-high plant. There is nothing like seeing it in front of you, and understanding the yield could be five times higher."

He adds the need for the consideration of protected cropping structures is that the main demand placed upon growers is higher quality and consistent supply, but says there is also an opportunity to access niche markets, and the possibility to export.

Higher control
"You have a higher control of your production and your growth," Mr Jovicich said. "You can integrate better biological control practices and use less pesticides. You can produce through a longer production cycle and you can complement, not necessarily replace, field production with greenhouse production and use the most efficient and cost-effective system at different times of the year. While older growers, they may not change their production system, but there is a succession plan in the family where someone will continue to do agriculture and think about how it will look in 10-20 years. Should they look at different production systems now?" 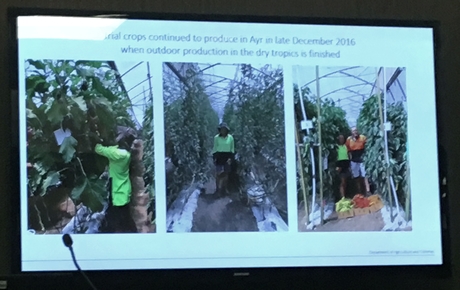 Mitigate stress
One of the challenges for Mr Jovicich has been influencing attitudes of farmers in higher temperature farming, as colder regions need the heat from the greenhouses to grow, many do not recognise the benefit of heat reduction measures.

"Maybe you don't need a glasshouse, but you need to try and mitigate some of the stresses in the plant," he said. "That may be a shade, it may be a plastic house, or whatever it may be. Then you have to explain what you get back from what you invest, and what are the risks, especially in cyclonic events. We are having discussions with seed companies to explain what we are trying to do, and there have been a few that have been really good in understanding where the industry is heading in the future. So, we said that variety may work in southern Australia, but we have different conditions. We are trying to see what works, and we know it's complicated to get new things, but we have help and hopefully in the future we will have a new variety for warm climates."