To find out whether or not spices that originate from countries with a warmer climate can be cultivated in the Netherlands, a trial is going on that focuses on the cultivation of two tropical spices. The results of the first trial with turmeric and black pepper are now known and are overall positive, as is noted by the NEXTgarden Ingredient Farm.

Ingredient Farm has as its goal to explore whether or not spices that are typically cultivated in countries with a warmer climate can also be grown, bred, extracted and sold in the Netherlands. During the project, students of the HAS University of Applied Science in the Dutch ’s-Hertogenbosch will also be conducting research.

The research conducted by HAS will consist of multiple phases. The first research phase came to an end on the 30th of June, 2019, and has been conducted by Sabine Robben, Jeffrey van der Ven, and Tessa Wildenbeest. Three fourth-year Applied Biology students at the HAS. They researched the propagation and diversity of turmeric and black pepper. 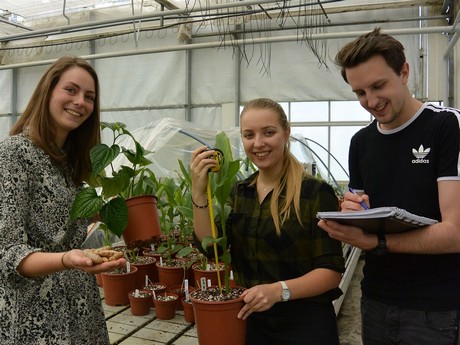 It is difficult to clean the plant material of both the turmeric and the black pepper, due to the presence of pathogens such as bacteria and fungi. Eventually, the placement of turmeric in tissue culture was a success, but for black pepper, more research is required.

Diversity
Turmeric rhizomes have also been collected from different stores in order to compare an as wide a variety as possible. Diversity is about the differences between varieties of a particular crop. It’s crucial to pick the most promising variety. The rhizomes are judged on properties such as fresh weight, length, and color, after which the rhizomes are planted in pots where they can grow into plants. During the growing period of the plants, measurements have been taken in order to determine the plants' growth rate.

After four months, the plants have been judged on certain traits both aboveground and below. All of the measurements and observations have been taken into account when determining whether or not there was diversity between the collected plant materials, which there was. One variety proved to perform well on the traits looked for above and below ground. This variety has been recommended for continued use in follow-up research.

The NEXTGarden Ingredient Farm project receives co-financing from the European Regional Development Fund as part of OPOost, The Economic Board and the Rabobank.