CAN (QC): Data center to provide heat to 7 hectares of greenhouses 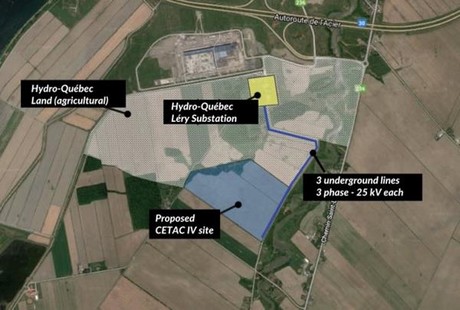 Following the development of its first 8.5 MW Heat Campus in Ste-Marie-Madeleine, Québec and with plans for two new sites for an additional 3.8 MW currently underway, the company is now preparing plans for the construction of a Campus with 10 Heat Stations, each supplying dry Agri-heat to a total of 770,000 square feet or 7 hectares of adjacent greenhouses. Between the data center agricultural Heat Station and greenhouse operations, the Campus is expected to provide direct employment for 150 people and will support a number of secondary jobs. The Beauharnois Campus will be called CETAC IV and at full capacity will use 40MW of power for Heat Stations and 9MW for photosynthetic lighting. 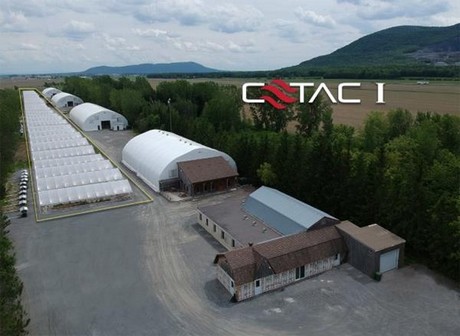 City construction permits and Hydro-Québec power connectivity have been requested under the Québec Construction Code and Building Act. 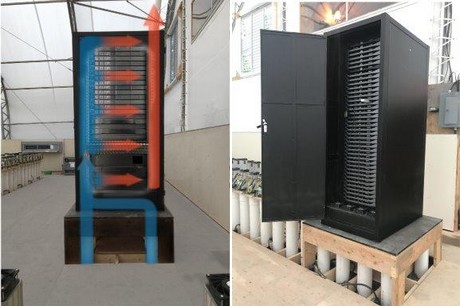 Negative pressure cabinet showing cool airflow from Canadian wells and server configuration. Cabinets are sealed and insulated from ambient air in the Dome

Negative pressure airtight sealed server cabinets
In addition to the company's well-established docking stations for cryptocurrency mining, CETAC IV will be primarily dedicated to the hosting of traditional computer servers which will utilize the company's recently developed sealed negative pressure server cabinets. Each negative pressure cabinet is designed to house up to 6,000 watts of servers with cooling provided through the Heat Station's Canadian well system – cooling is therefore done naturally and without the need for air conditioning or significant electro-mechanical venting. All hot and dry heat is accumulated from within the Domes and is then transferred to adjacent greenhouses. The Heat Station with Canadian well design has the ability to easily swap between negative pressure cabinets and various models of ASIC-based computer server equipment as required.

The agricultural Heat Station will be fully compliant with the Data Center Redundancy Architectures Uptime Institute N+1 specification related to high resilience distributed power configuration redundancy. This includes Tier 3 level uptime. Unlike other data center designs, the Agri-Heat Stations do not require any powered cooling redundancy as all cooling is accomplished through its natural passive-cooling ground-coupled heat-exchanger Canadian well technology.

With a population of just over 5 million people within 100 miles of the facility, the company expects that all produce from the greenhouses will be sold locally, minimizing the carbon footprint from transportation – particularly in the winter months. Based on published data from Hydro-Quebec, the company estimates that the Beauharnois facility would avoid some 240,000 metric tons of greenhouse gases per year when compared with a similar facility powered by electricity from fossil fuels.

CETAC intends to partner with local farmers and greenhouse operators for the operation of the greenhouses and, as with its first heat station campus, will soon issue an international Request for Proposal for the development of this site and installation of 6,500 cabinets of 6 kilowatts each. The company has also applied for Hydro-Québec's Economic Development Rate which provides up to a 20% reduction in power rates until 2027. The Request for Proposal will be issued to international hyperscale data center cloud-based operators where environment health and safety, sustainability and carbon offset are a priority. The company anticipates entering into hosting service agreements in Q4 2019. Each Dome will operate as a distinct legal entity within the CETAC IV Campus at just under 5MW each and the company will seek private financing for each entity.

"Unlike other data center operations which utilize power for one purpose only and waste valuable heat output, CETAC IV is first and foremost an agricultural project. Through the creation of the heating system, it combines the increasing demand for data center services with economic development and food security while at the same time is mindful of climate change and the environment overall," stated Benoit Laliberté, President of UnitedCorp. "Our goal with this project, and eventually others in the Province, is to be the most green and sustainable operation in the world by using computer servers as heat sources while still generating the highest possible value-added per megawatt, all while maintaining full compliance with the Quebec Act Respecting The Preservation Of Agricultural Land And Agricultural Activities by making use of a land lot for agricultural purposes."