FMC plans to invest more than $50 million over the next three years in capital improvement projects, including a state-of-the-art reconfiguration of a greenhouse and research facility at the company's Global Research and Development headquarters in Newark, Delaware. 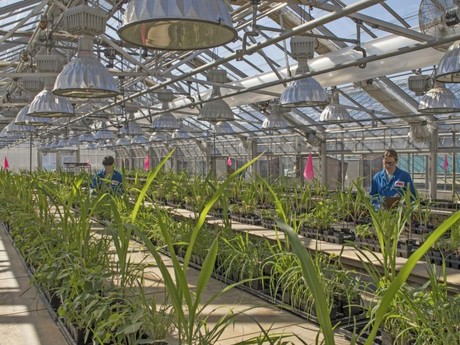 FMC acquired the 515-acre Stine Research Center campus as part of its acquisition of a portion of DuPont's crop protection business in 2017. The transaction was the largest in FMC history and retained more than 500 jobs in Delaware, transferred 45 employees from a nearby state and created 19 new positions.

"FMC is making a significant new investment in Delaware, and in a campus that has long been a center of world-class biotechnology and agriscience research," said Governor John Carney. "This investment in Newark will support good-paying jobs for Delawareans and their families, and the continued growth of our state's economy. It's more true than ever that Delaware has a world-class workforce, and a quality of life that is second to none. And these investments by FMC help reaffirm that our state is a great place for businesses of all sizes to put down roots, grow, and create good-paying jobs."

"Over the years, FMC has been a leader in developing agricultural products that our farmers need," said Delaware Secretary of Agriculture Michael T. Scuse. "As a global agricultural leader, we are excited to have their research facilities based in Delaware and their continued investment in the First State."

FMC plans to reconfigure an existing structure at the facility to enhance its global research and development (R&D) efforts. In support of the project, the company plans to hire 13 employees over the next three years, which would bring its total of full-time R&D employees at the Delaware campus to approximately 375. The new positions include professional scientists and skilled associates, adding approximately $1.3 million to its annual payroll. The site's total workforce of nearly 600 includes support staff and contractors.

"We will invest nearly $2 billion in research and development through 2023 as a cornerstone of FMC's long-term growth strategy," said Mark Douglas, president and chief operating officer. "FMC employees at the Stine Research Center will lead much of this critical discovery and development work to serve our global business and customers. We're pleased to partner with the State of Delaware to further our investment in the area."

To support its expansion, the Council for Development Finance (CDF) approved a grant for $1,642,500 from the Delaware Strategic Fund, including $142,500 for a performance grant and $1.5 million for a capital expenditure grant. The grant supplements the company's own investment over a three-year period. Both grants are contingent upon meeting employment benchmarks.