A world-renowned academic and media commentator says one of the biggest shared challenges facing all communities across the globe is non-communicable diseases, with the most common cause being a poor diet.

Dr. Sandro Demaio has worked in many countries, and experienced living in many environments; from big cities, to third world villages, but he has noticed common occurrences of diabetes, cancer, and lung and heart conditions.

"Whether it was treating some of the marginalised communities in Australia, whether it was working after a major disaster in emergency zones, or whether it was working in remote Mongolia in a rapidly emerging economy - I noticed one shared challenge," he told the Hort Connections conference. "I realised the single biggest risk factor for disease worldwide, and one of the big risk factors here in Australia was food. It wasn't malaria, it wasn't HIV, it wasn't TB, or water and sanitation issues. It was unhealthy diets; whether it was rich or poor, young or old, people were increasingly dying from eating too much of the wrong food." 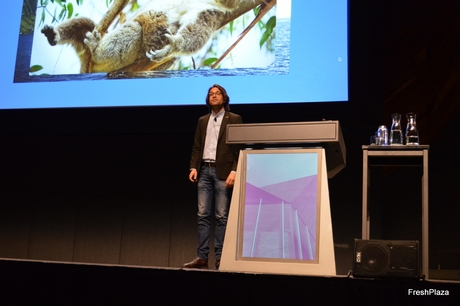 Since 2018, Dr Demaio has been Chief Executive Office of EAT: the science-based, global platform for food systems transformation. He says he made the switch from being a clinical doctor, treating diseases, to becoming a researcher, trying to influence change and prevent them from surfacing in the first place.

He notes that there are 2.1 billion people overweight or obese today, which is a third of the global population - but in Australia, it is two-thirds of the population. However, at the same time, one in five children across the world continue to be "stunted".

"What that means is that children are malnourished for such a long period in the early years life that it permanently impairs their social, economic and physical development," Dr. Demaio said. "So, they will never reach full height, brain development, and full economic and social potential. Poor nutrition early in life will have a legacy across a whole lifetime. Malnutrition in the early years of life, even the first 1,000 days, will have follow on effects that limit economic and intellectual capacity in the second and third decades in life. We have good evidence on this. In fact, the earning capacity of an individual is estimated to reduce by 20 percent into their 20-30s if they face malnutrition early in life."

He added 41 million children across the world are overweight, and between a third and a half of the population lack micronutrients, showing something is not working. But Dr. Demaio says the problem has progressed from poor countries not having enough food and rich countries having too much.

"It's not as simple as saying we need more food," he said. "The focus is now turning to the quality of food and particularly diets. Countries like Indonesia have 30 percent stunting', where one in three children are still permanently impaired because they don't get enough of the right food early in life. At the same time, up to 30 percent of adult women are overweight. We estimate two in three Australians are overweight, and up to two-thirds of those people are malnourished in key micronutrients. In many households, in many communities, in many individuals across the planet we are seeing multiple forms of malnutrition."

Dr. Demaio also explained that the world was in a period of "Anthropocene", where humans are a geological force on nature, and shaping the natural planet around us. He added that for decades world hunger was reducing, until about four years ago, when it started to increase again.

"This was largely due to climate change; a changing climate, a more volatile and unpredictable climate, and conflict," Dr. Demaio said. "We know the single biggest driver of greenhouse gases is the food sector; everything from how we grow food to how we waste food. One of the ignition points of conflicts over the past 10 years has been a spike in food prices. The way that we are eating in parts of the world we live, the way we are overconsuming and wasting food, is in fact driving hunger in other parts of the world. Not only the way we are producing food, but the way we are wasting food is also driving climate change, which in turn is driving world hunger."

He reinforced the global vision of achieving a food system by 2050, which can feed between 9.2 and 10 billion people a healthy diet and a healthy planet that can be passed on to future generations. He says it is achievable, and that was proven in a scientific paper compiling the best available evidence, by 37 of the world's leading scientists over 2.5 years. One of the key findings is that globalisation is a good thing, and countries should not be moving away from it.

"The only way we are going to be able to feed 9.6 billion people is to dramatically increase trade, and grow food where it is going to grow most efficiently," he said. "Then work out how we get over the big challenges of food sovereignty and this historic need to produce enough food for our entire country. Australia will be a big exporter, naturally, but others will need to strengthen multilateral relationships to ensure the trust is there. So, in the long term our global trading system will be able to feed a growing world, and allow other parts of the world to focus on other land uses, for example, preserving eco-system services."

Another thing that needs to be done, according to Dr Demaio is shifting consumer diets, admitting that Australian's love what they eat, which are often high in salt, sugar and fat. He says is the stage of discussion food researchers are at now.

"I have been trying to shift diets for 10 years - and it is difficult to do," he said. "This is probably the biggest and hardest (challenge). Australians consume increasing calories from what we call discretionary foods; those high in calories and low in nutrients. The diet that was outlined by these experts first of all is a reduction in calories. So, it's about eating less and ensuring we get the right nutrients in that diet to be able to maintain a healthy life - and then being able to deliver it at scale. we are talking dramatic increases in fruits, vegetables, nuts, wholegrains, seeds and healthy oils. 19 in 20 Australians currently don't consume the recommended amount of food and vegetables."

While he admits massive changes are possible, there are major realistic challenges facing both producers and consumers in the implementation. For example, market incentives may be against businesses transitioning and maintaining sustainable practices, as without instant mass consumer support it may not be economically viable.

"How do we best communicate, how do we best frame, how do we best position foods that are healthier to consumers to get them to choose it not because of guilt, but it is the path of least resistance," Dr Demaio said. "Then it's about how you promote it, through behavioural economics because we need long term sustained change. The hard part is, how do we achieve policy change? We need policy change to ensure that we are growing the foods that reflect what our guidelines are recommending, and what our population needs for the future in a way that remunerates and respects those that grow and produce it."