“A friend of mine works at a seed company and he told me about a different type of cauliflower,” says Harris at Mann Packing Co. in Salinas, Ca. “It was this goofy-looking thing with green stems and a blonde head. It wasn’t your conventional white-stemmed cauliflower.”

What his friend was showing him was caulilini, a vegetable that’s part of the brassica family of vegetables (which include cabbage, cauliflower, broccoli and more). Yet, it tastes nothing like cauliflower. All of this was enough for Mann to pursue the vegetable further.

Mann worked with Aruba Seed Co. on 12 different trials of caulilini. “This vegetable’s origin is from Asia and basically it’s for the tropics. But we’re in a totally different climate so we had to figure out what varieties we were going to work here vs. what works in Asia,” says Harris.

In the end, one variety worked and Mann blessed it with the name Trident after an island in Southeast Asia, as a nod to the vegetable’s origins.

“We started out with ¼ acre plot and then progressed to now having four acres a week,” says Harris. The initial market was the foodservice sector to loop in chefs and get their thoughts on it. “We’ve done that for the last year and few months and we’ll launch our florets in the middle to the end of July for retail and foodservice who prefer florets over spears,” he adds. 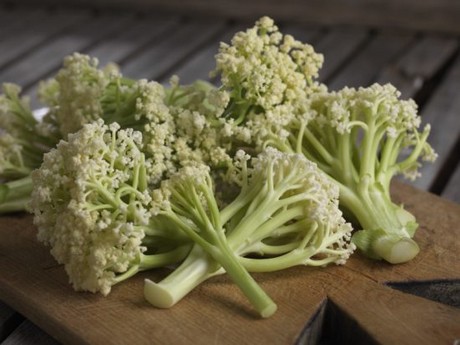 Caulilini, like its brassica counterparts, can be prepared a number of different ways--from eating it raw to barbecuing, microwaving it, steaming it and more. “As it matures, the head is loose and allows filtered sunlight to penetrate through the head. This enhances the greenness to the stem and it comes up with a different flavor that’s sweet,” says Harris. “It’s totally different from cauliflower.”

Harvest and handling
The differences also lie within the harvest process. “It’s a one or two cut harvest, so we go through the field one or two times. It’s a maturity thing. I’m looking for expansion of the head and elongation and stem colour,” says Harris. “We floret it up in the field. The difference between cauliflower and caulilini is, caulilini has the same durability and structure as broccoli but you don’t get the bruising during handling like you would with cauliflower.”

Looking ahead, along with marketing the produce via social media, the push will be on retail exposure of caulilini. “With foodservice, the exposure is plateaued out,” says Harris. “People have seen it, it’s on social media so the next step is a floret retail pack. There’s a lot of interest out there and if our projections go the way we think they’ll go, we will increase our acres.”