"A grower shouldn’t want to exert too much influence”

Over fifty years ago, the father of pepper grower Antonie Teeuwen started an open field company that cultivated carrots, leeks and chicory, just to name a few, on the other side of the Grashoek in the North Limburg. Little by little, with products such as lettuce and kohlrabi, the cultivation shifted to the greenhouse. “Around 1985 my brother Ruud started working at my parents' company, and seven years later I joined as well because before that I worked four years as a representative after finishing my studies at the HAS University of Applied Sciences. In 1992 I became a part of the company as well. At that time, the company had an acreage of 2.5 hectares and was cultivating peppers.

After my fathers’ passing, Ruud and I ran the business together for a while, but since I couldn’t shake the feeling of us being like two captains trying to take charge of the same ship I started my own company and one year later I built a new greenhouse, two hectares in size, on this location in the greenhouse horticulture area known as De Kievit. A few years later the greenhouse expanded to the eight hectares it currently has, with the latest techniques for red pepper cultivation,” Antonie says. 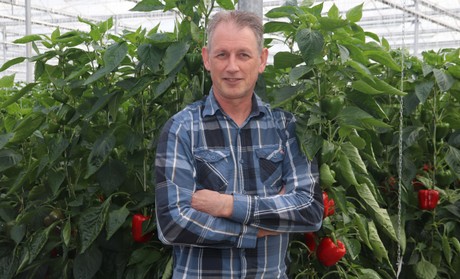 He made the conscious decision to stick to that size in order to still be able to control everything himself. Smiling he says: “I am kind of a control freak and also a perfectionist, so if I want to stay involved with all aspects of the company its not good to have too big of a company. With one cooperative foreman and around ten permanent employees, everything is still manageable.”

Has he never thought about cultivating something else, or to put it differently: what is it that makes cultivating peppers so attractive? “You won’t get dirty from it, ha-ha. No, but seriously, during my studies, I had an internship at a pepper company, and from the get-go, I found the cultivation interesting and exciting. You keep encountering new challenges, and it is a very delicious product to boot.”

Cooperation
Teeuwen has been a member of Pamosa and Royal ZON for years. Does this conclude that he is a cooperative man? “Yes, cooperating is something I was raised with. My father was also the kind of man that would manage, collaborate and come up with solutions together. If you can’t divide, you also can’t multiply, is my motto if you would ask me. That is why I feel right at home at ZON, where my love for the clock also plays an important part. With products like peppers, which strongly fluctuates in supply, you really need the day to day trade because it simply isn’t possible to put everything into a contract. Because of this insight, I have been focusing less on the kilograms and more on the quality in the past few years. You need to make a difference in the market and with quantity alone, you won’t be able to.”

Since the beginning of April, Antonie Teeuwen is part of the advisory group at ZON, which has to advice the board at the end of the year on the direction Royal ZON will be taking in the future. “I think it is important to think about this with the others, but at the same time, I believe that we as growers want to have to much influence on the company. It should be professionals who decide the direction the companies will take. As a grower, you should be aware of it and think critically about it, but we shouldn’t want to decide the companies direction ourselves. The same can be said for the sales. I worked for four years as a representative myself and know how hard it is to find new customers. In my opinion, we should leave this to the professionals.

But let’s get back to the advisory group for a second: the sale of Fresh park in the Dutch town of Venlo has, of course, led to members thinking more and more about our future together. Personally, I don’t think money should be the reason to do something or not when talking about strategic plans for the future, because you first need to think about what your own vision is, regardless of the money. Luckily, more members of the advisory group feel that way. In terms of content, I am in favor of the further expansion of the clock and the creating of a strong ZON-brand.”

Future
Teeuwen himself has about ten years left ‘to go’: will this he continue in the same way as he does now or does he have other ambitions? “That is very topical. My children have no interest in coming to work at the company, so I am thinking about how to go on from here. For now, it’s to just continue business like usual.”

The article, for this publication slightly altered, previously appeared in ZON-magazine.