Vegetable gardener Barbara Schmid is a Swiss pioneer in cultivating organic-grade microgreens. In contrast to sprouts, these are cultivated after germination under light and on substrate. With the purchase of a former ornamental garden center in the hamlet of Süri near Neuenegg BE, the newcomer started her life as an independent grower three years ago. The neighbors were amazed by the billboard "biological microgreens", that suddenly appeared at the barn door. 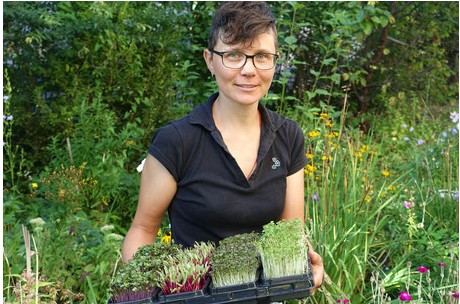 After two years of transition, the sign of Bio Suisse was added at the beginning of 2018. It is thanks to Barbara Schmid that the cultivation of microgreens is now officially regulated by the guidelines of Bio Suisse. "I first had to explain to those responsible what it's all about," she tells the Bauernzeitung. For example, in what way is it different compared to sprout cultivation? "In contrast to the sprouts, microgreens grow in a substrate, require light and are cut," she explains.

Light, in particular, is a decisive factor. She was astonished that her two professional colleagues in the US and Canada were allowed to use artificial light according to their organic guidelines. It was always clear to her that her microgreens should only grow with natural sunlight.