It has already been fifteen years since Thomas Ruiter and Menno Keppel of D.A.T.T. packed their bags and went off to Thailand to sell horticultural supplies and technology. Since 2019, Thomas, Menno and their Thai partner Nickey Panadda Inkeaw run a successful tomato company, and their product can be found in nearly every supermarket. “If you had told me this seventeen years ago, I would have laughed in your face”, says Thomas. 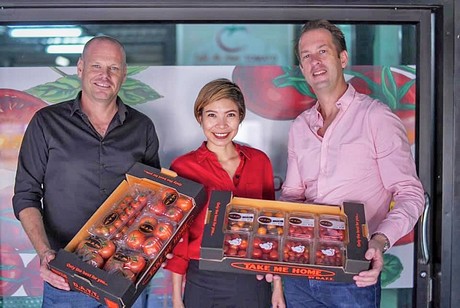 Supermarkets had only recently been introduced when the Dutch gentlemen arrived in Thailand. There were only a few TOP and Tesco locations where mainly the elite did their grocery shopping. This pales in comparison to recent years, when around 2000 new supermarkets were built in Thailand. Dutch Agro Technology and Trade – or D.A.T.T. for short – provides three different concepts. All of the premium tomatoes are sold under the Take Me Home brand, and the same product of a different quality, sold in less exclusive supermarkets, is sold under the Tomato House brand. For a select few supermarkets, they also provide tomatoes under their own brand.

Lining up for seeds
“Our adventure had a pretty slow start”, Thomas mentions at the start of the interview. “We came here with the goal of selling horticultural resources and technology to local growers, and it was not our intention to end up in the tomato business. We quickly discovered, however, that we needed to set an example in order to sell our things. Fresh produce was grown outside in the ground, and sometimes even under little makeshift roofs, before being sold on the market. There were no real greenhouses to be found. That is why we started a small testing greenhouse in the North of Thailand, in which we showed what was possible with only a relatively small investment, and the results that can be achieved by using the Dutch seeds. This approach seemed to work like a charm: local growers were lining up for the seeds.” 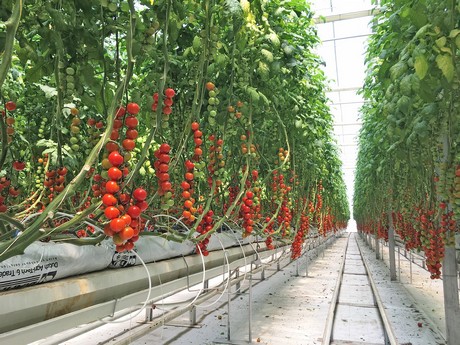 Constant delivery
It didn’t take long before the entire village was filled with small greenhouses that were used to cultivate tomatoes from Dutch seeds. “Then we faced a second problem”, Thomas said. “Although we now had a great product on our hands, the local markets were not always used to selling ‘too’ great of a product.”

That is why Thomas and Menno started a marketing company in order to market the growers’ products. They contacted the supermarkets, and there the tomatoes were sold under the Take Me Home brand name. As retail developed further, the supermarkets started to have more requirements the product needed to abide by, Thomas says. “We were able to deliver, but the supermarkets weren’t able to base their supply on our deliveries. There were months that we couldn’t deliver a single product. Our brand came and went. We decided to fill this gap with our own production.”

The test greenhouse made way for a greenhouse that was similar in terms of technology to the average Dutch greenhouse, and by now D.A.T.T. produces seventy percent of the total amount of products that are being sold under that brand name. “Supermarkets have become more attentive to the safety and quality of their food. That is why we had to say goodbye to many of our growers that supplied Take Me Home tomatoes. We have continued with a select group of growers.” 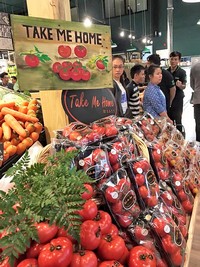 Headstrong with packaging
With loose tomatoes, vine tomatoes, cherry and plum tomatoes, the product range of Take Me Home isn’t that large, but thanks to the many ways the tomatoes can be packaged, the product range still consists of over 25 products. This was very different a few years ago. “Packaging didn’t have any other function than to simply get the product to the supermarkets. More often than not the products were packaged in old boxes, and as soon as they arrived at the supermarket they were unpacked. When we started with the first display box we were considered headstrong by most of the locals. In Western supermarkets, it is almost impossible to think of a world without display boxes on the shelves, but in Thailand, you simply didn’t see them. At first, people weren’t that excited about them. ‘I don’t want to pay for the box’, people often told us, but this never discouraged us. Eventually, it did provide a great introduction to our company in Thailand.” He laughs: “Our boxes even got reused by a supermarket. They placed kiwis in them, which led to people calling us to ask if we also produced kiwis.”

By now, other growers have also discovered that the packaging can be used as a marketing tool. “Now everything is packaged, there are hardly any products left that are being sold separately anymore. We did experiment with selling tomatoes separately so the consumer was able to choose the ones he wants, but we stopped doing that. Around these parts, people like to squeeze the tomatoes to see if they are ripe.”

Abundant product range
The Thai market is developing at a rapid pace. The middle class is growing and keeps gaining purchasing power. The old-fashioned market place is slowly making room for supermarkets. On the market place, it is not always sure if they have what you need. In the supermarkets, they have a massive amount of products and it is way more convenient. Thomas: “In the West, you would think that the Asian fresh produce shelves would be a bit behind, but in reality, you won't believe your eyes. Japanese melons for sixty euros a piece – just to name one. The product range is excessive, to say the least, and often of good quality as well. However, it is not always a good thing to have twenty different types of tomatoes and six types of cucumbers on the shelves. It makes it difficult for us to make good product planning when just any newcomer can take away shelf space for a few weeks. This has happened because growers were not able to continuously deliver their products, making the retailers accept everything that was offered to them. Luckily we have seen an increase in loyalty as of late.”

Horticultural supplier after all
After all sorts of detours, Menno and Thomas are currently focusing on marketing horticultural equipment after all. “The mountainous landscape makes it difficult and expensive to build more greenhouses, so growers benefit from the highest possible profit per square meter. Together with the firm Luiten, we have developed a greenhouse that is ideal for these tropic conditions. By applying all sorts of technical adjustments, we now yield thirty-five kilograms per square meter.” A few years back, Menno and Thomas started the Agri Solutions Asia company with which they bring this greenhouse to market.

This article previously appeared in the 4th edition of the 33rd volume of the AGF Primeur trade journal. See www.agfprimeur.nl.