It is quite warm in northern Tunisia at this time of year, but a lot of hard work is currently being done to realize 1.1 hectares project. It concerns a foil greenhouse for Rainbow Horticulture Tunisia. "Construction has been going on for two months and the greenhouse has to be finished by week 34," says John van Marrewijk, commercial director at Rainbow Growers. “That's also the earliest time for planting to take place in Tunisia. In three weeks we will gradually fill up the greenhouse. By then it will still be nice and warm, but will also start to cool down from that moment." 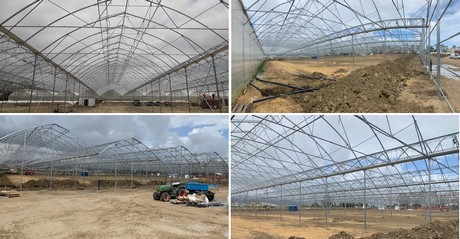 In the coming period the roof will be covered with foil, followed by the greenhouse facilities in the project that is being built by Agrikol.

Yearround supply
Rainbow Growers is a cooperation from four Dutch growers uniting their strengths. They started the Tunisian production to close the winter gap for their Dutch pepper production.

At the moment there is still 5.3 hectares in the Tunisian Fondouk Djedid-Nabeul. In 2015, a start was made with 2.5 hectares, later followed by another 2.7 hectares. Now another part is being built on a total acreage of 15 hectares.

“There is a clear need for year-round peppers and we are trying to meet this demand step by step. This year with 1.1 hectares and for next year also an expansion is planned. It is not yet known how large that will be. The intention is to have 10 hectares of greenhouse in 2021, whereby the rest of the plot is used for, among other things, water supply. A warehouse is already available, it was built last year." 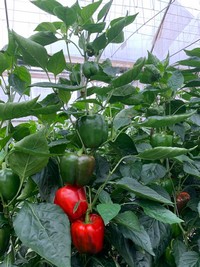 Block peppers
Initially, the intention was to grow pointed peppers in Tunisia, but on closer inspection the climate turned out not to be so suitable for this cultivation. "Especially towards the end of the cultivation, it was often too hot for the pointed peppers." That is why they switched to block peppers, also because there was a lot of demand for them. “There is interest from the retail sector for Tunisian peppers, but our company is still too small to meet that demand. In the long term it is their intention to import bell peppers from Tunisia, but for that we will first have to grow even further."

At the moment, demand from Russia is growing strongly. “Especially in the last six months there has been a lot of extra demand from Russia. That is because it is possible to import from Tunisia without further obstacles."