Goods from the Netherlands clearly dominated events, more so than the goods from Turkey and the supply of these goods grew. Meanwhile, the presence of the Spanish wares diminished. Belgium, like Germany, supplemented the range with small quantities. Moroccan imports only appeared in Frankfurt for the weekend. Locally, availability became so strong that prices literally crashed as demand failed to keep pace with the increased supply. Thus, price drops of 20% and more were no exception. However, this did not always have the desired invigorating effect on the subsequent sales. 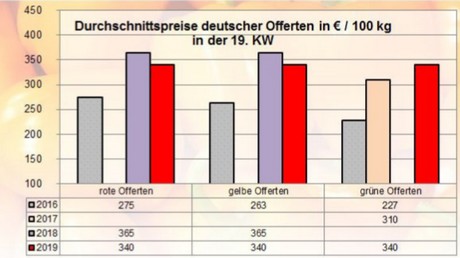 In Munich, a different picture emerged: Here, the demand could not be completely covered, so that higher prices were not uncommon. Something similar was to be seen in Berlin, where some varieties went straight to food retail and therefore the supply was too low. So the customers in the capital also had to dig deeper into their pockets. Increasingly traded were Class II articles from Spain, which generated a friendly demand because of the low prices.

Apples
Domestic batches still dominated the scenery: Elstar, Jonagold and Braeburn formed the basis of the offers. The quality of the fruits was usually quite convincing. The sellers rarely had to modify their prices as a result of the ongoing sales.

Pears
The supply from overseas dominated events, with priority being given to Chilean and South African products. The sales were usually quite low-key.

Table grapes
Thompson Seedless were really omnipresent; They came from Chile, India and South Africa. The inflow from South Africa became smaller and smaller. As demand also decreased, the prices remained mostly at their previous level.

Strawberries
Italy and Germany we almost equal participants in the events. The bad weather at the beginning of the week led to a sluggish demand, which could be satisfied without any problems.

Lemons
The sales of the Spanish lots -that had a monopoly this week- was steady. The traders seldom saw any reason to correct their previous prices.

Bananas
Regarding bananas, there was a mixed situation: at times, many batches coming through the Netherlands appeared on the scene, that were difficult to accommodate.

Cauliflower
In terms of quantity, Germany overtook France, which was mainly due to the massive drop in French supplies. Italy also lost its presence in a massive way.

Lettuce
With regard to ice berg lettuce, the availability of the local batches intensified immensely. Spanish goods came under pressure. Since their quality was not always too convincing, dropping off of their prices could hardly be avoided.

Cucumbers
The range consisted of Dutch, domestic and Belgian shipments, all together. The demand was not particularly strong. As availability expanded, some places saw to much supply.

Tomatoes
The Netherlands and Belgium dominated events there, more so than Italy or Germany. The weather was not terribly good for the sales. Availability grew and eventually exceeded the sales possibilities.

Asparagus
Germany apparently shaped the events. Availability was limited because of the bad weather. But the demand was not particularly strong, so it could be easily satisfied.