According to René Oudijk of Van Nature, the two associations remained in contact after the last merger attempt. “Some things take time, and we’re naturally 4.5 years further along now. Van Nature moved a little, Best of Four moved a little.” 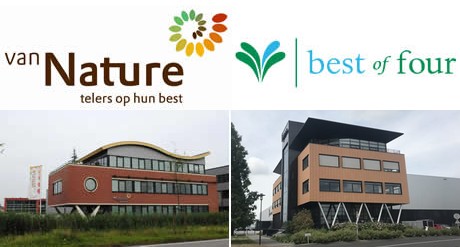 The situation in horticulture is different as well: while the crisis was at its height 4.5 years ago, the worst tensions are now over. Yet according to René, there was never a necessity to merge. “Even back then there wasn’t a necessity, we want to merge just because. We have now also noticed that our members have a lot of support for this merger. The vote passed with a large majority, there’s nothing uncertain about that. The wish of the members is to work toward each other even more.”

At the time, the points that caused the merger not to take place weren’t announced. “However, these are naturally the points you talk about first,” René confirms. “Otherwise, a new attempt has no added value either. We’re having exploratory discussions, and we’re not yet at the point that we’ve talked and researched everything, but we definitely came closer together.”

In talks
Ton van Dalen doesn’t want to look back on earlier talks either. “We’ll mostly be looking forward. The world around us is changing, and that’s also true for how we work as two parties. For example, in recent weeks we started talking again. The exploratory discussions have now been started. We’re now following all necessary steps to complete a merger attempt. That involves, among other things, approval from the ACM, but also the formation of a board of directors and organisation,” Ton explains.

He feels positive about the discussions. “Looking at the assortment and DNA of both associations, it should fit together well, in my opinion.” With its 190 growers, Best of Four offers a complete range of fruit, greenhouse and outdoor vegetables. Van Nature’s emphasis is on greenhouse vegetables, complemented with outdoor vegetables and strawberries. The entire range is considered in the merger proposal. A combined association would be the largest in the Netherlands. “But becoming the biggest isn’t our ambition. Being the best is our ambition,” René says.

While Van Nature exclusively supplies its products to its four trade partners Combilo, Haluco, Levarht and Scherpenhuizen, Best of Four isn’t associated with any trading company. “We’re not starting the merger talks on condition of exclusivity, but we’re looking at who does things best. After all, both Van Nature and Best of Four want to achieve the best prices on the market for their growers,” Ton concludes.