Three weeks ahead of the crucial European elections, EU farmers and agri-cooperatives, represented by Copa and Cogeca, are launching their manifesto entitled WeFarm4EU, encouraging the whole European farming community to raise their profile and to vote. In a tense European and international political climate, agriculture is a solution to many key social, political, environmental and economic challenges. For the Brussels-based organisations, Copa and Cogeca, a strong Europe cannot move forward without strong agriculture.

Introducing the concept of the WeFarm4EU campaign in Brussels, Pekka Pesonen, Secretary General of Copa and Cogeca, underlined: “The coming 2019-2024 political cycle in Europe has the potential to define the very shape of the European farming model for generations to come. We will face difficult debates on generational renewal, low farm incomes, future agronomic practices, market volatility and the effects of climate change. We are aware of and ready to navigate these challenging issues and to face the changes that lie ahead. For the past 60 years, the Common Agricultural Policy has been the glue that holds the European project and agriculture together. The level of ambition that the future Commission and Parliament show towards European agriculture will be a good indicator of the strength of the European project, as well as the unity of the Member States.” 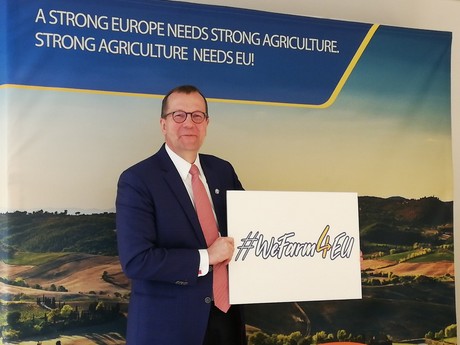 The manifesto presented by Copa and Cogeca depicts the central role played by farmers and agri-cooperatives, their ambitions and the measures necessary to achieve these objectives. It focuses on four key issues: the future of the sector (WeFarm4Future), the sector’s role in protecting the environment (WeFarm4Planet), in boosting economic growth (WeFarm4Growth) and in ensuring territorial dynamism (WeFarm4Community).

Feeding half a billion citizens with safe, affordable, sustainable and high-quality food will be a growing concern. With a large share of European farmers set to retire in the coming years, the EU farming sector needs to become more attractive to new entrants than ever before. To make this possible, EU decision makers must focus on improving agricultural incomes, which will also allow farmers to fulfil their role as carbon sequestration champions and promoters of the bioeconomy in the fight against climate change. European farmers, forest owners and their cooperatives need an EU that guarantees access to the latest technologies and agronomic resources based on science, as well as an ambitious EU trade policy agenda which offers new market opportunities, especially in the context of Brexit.

Commenting on the next steps, Mr Pesonen said, “Shortly after their election, future MEPs and Commissioners will have to work on fundamental policies for the future of agriculture which go beyond the CAP. From reading our manifesto, it is clear that agriculture should be at the centre of many EU policy agendas such as those relating to investment and competitiveness, the bioeconomy, research and innovation, or future trade. It is essential that our future representatives understand the importance and the diversity of the European farming community. For many new MEPs, agriculture is not part of their family heritage. In the face of continued agri-bashing and simplistic solutions, a great deal of work to explain and debate key agricultural issues will be needed after the elections and during the next legislative term. That is why we plan to launch a comprehensive campaign around this manifesto.”