"Demand for large calibers was very high this year"

The market share of imported tomatoes in the German market has remained almost the same in recent years. There were no significant ups or downs, although over the last three years there has been a steady decline of about 10,000 tons per year. In the last 5 years, quantities have always come out at between 720,000 and 760,000 tons. This was reported by the Federal Agency for Agriculture and Food (BLE). 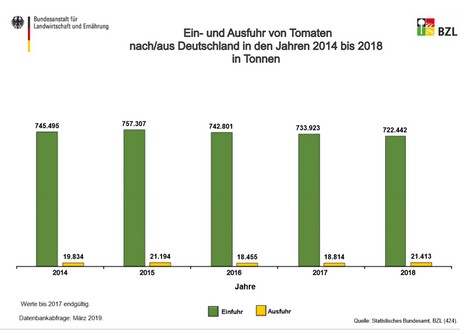 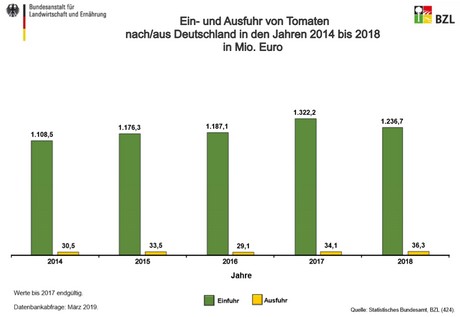 Great demand for large calibers
"The demand for large calibers was really high this year, but supply was insufficient, which in some cases became a problem for us," said a marketer from the Hamburg area. "Generally there is a tendency to go towards smaller varieties, mainly coming from the retail trade. At the moment however, demand from the catering trade is great, because there are simply not the right sortings."

Because of the end of the Moroccan season, the prices are now going upwards, the marketer knows. "Unfortunately we could not predict that, otherwise we would have bought up more goods." Moroccan vegetables are gaining more and more ground in the German trade as a cheap alternative to Spanish products. The days of inferior quality from this country has been left behind.

After Morocco he gets the tomatoes directly from Spain or colleagues from the Netherlands. "We have also received offers from Egypt," he says. German products will be in the assortment within a few weeks.

In terms of varieties, demand is very much dependent on each particular customer: "Compared to cherry tomatoes to beef tomatoes, for example: The larger ones are very popular in the catering trade, whereas the smaller ones are going to supermarkets or to our direct delivery."

Market situation on the important wholesale markets of Germany
The availability of goods increased immensely. From the Netherlands, Belgium and Italy, shipments intensified considerably. The first German panicle broadleaf offerings and cherry tomatoes started off in Frankfurt, which led to discounts at the competitors. Moroccan and Spanish shipments were limited overall, leading to higher prices for tomatoes in particular. Beef tomatoes often became cheaper as a result of too large stocks; these came in from Belgium, Spain, Morocco and the Netherlands. In general, demand could be satisfied without difficulty.

In Hamburg, actions of the food retailers hampered the placement of Spanish goods in the market. In Cologne, the sellers lowered their prices in order to achieve a speedier sales. Furthermore, Turkish and French goods could complement things, but they were not available everywhere. (BLE Marktbericht)